It’s the bitter winter of 1962 and Pat, along with his brother Johnny, friend Alton Underhill, and their father Sylvernus, travel the Bartholomew Road to gather firewood. On their way the boys venture upon a not-so-pleasant moose, the focus of the twenty-second installment of Pat Fournier’s memoir Memories of a Boy Growing Up in Blackville.

It snowed a lot that winter. In the process of clearing the main road, the county snow plows had pushed the snow up into high banks, which made for great fun for sliding down them on a toboggan or pieces of cardboard, for making forts for snowball fights, and digging under them to make snow tunnels.

We had been living in our new house now for a couple of years.  Dad built our new house on the same lot where our first home burned down three years ago, when I was in grade four.

The first winter we moved into the new house, it was nice and warm inside, since the tongue and groove boards were new and fit together tightly.  Also, the tarpaper that was nailed over the boards with laths helped to keep the winter wind out.

By the second winter though, the wood had shrunken so that the tongue and groove boards weren’t as snug anymore, and the tarpaper added little value in keeping out the cold.  The house was just sitting on blocks, with no basement, but only bare ground underneath.  And while Dad shoveled snow up against the base of the house to keep the wind out, that still didn’t seem to help much.  It was still cold in the house at night after the fire in the kitchen stove had gone out.

There were only two bedrooms upstairs in the house that burned down a couple of years ago:  one for Mom and Dad, and one for me, Johnny, Marjorie and Katharine.  And there was only a large sheet strung up to separate the boys’ side of the room from the girls’ side of the room.  But in the new house, Johnny and I had a separate bedroom all to ourselves, and Marjorie and Katharine had their own separate room too.

But while it was nice to have separate rooms, the house was still quite unfinished.  We didn’t have doors on our bedrooms, only sheets that were hung up on cords strung across the tops of the doorways, which we pulled closed for privacy.  And the inside walls weren’t boarded up at all, or insulated, or covered with sheets of gyproc.  So the studs that made up the framing of the house were visible in all the rooms.  And when it was really cold out, we could see frost on the short flat-headed nails that poked through from the outside.

My God it was cold in our bedrooms at night!   Sometimes I’d wake up in the middle of the night, after the fire in the kitchen wood stove had gone out, and see Dad going to each of our beds and piling winter coats on top of our blankets, to help keep us warm.  So we always needed wood to feed the kitchen stove to keep the house warm, and for cooking, and for heating water to wash.  And Dad always made sure that there was a good supply of firewood in the shed.

One day, as me and Johnny and our friend Alton Underhill were playing in the snow, Dad came out of the shed carrying his axe.  A couple of days ago he had gone up the Bartholomew Road and chopped some trees down and cut them into six foot lengths, and trimmed them of their branches.  So now he was going back up to pull them out of the woods and stack them at the top of the snow bank at the side of the road.  He’d arrange for their pickup later, and have them brought home for sawing into firewood.  So the three of us decided to go along, and help Dad with hauling the tree lengths out of the woods.

Dad had gone into the woods to cut down the trees a short distance down from the ‘dump road’, which was about a mile up the Bartholomew Road, so we had a bit of a walk ahead of us.  The dump road was another dirt road, like the Bartholomew, which cut off into the woods for a ways, and led to a large open pit where everyone went to dump their junk and garbage.

The Bartholomew Road had been plowed, but since the road wasn’t used much, the wind gusts had already pushed small wavelets of snow drifts onto the road.   And every now and then a gust of wind would push a small mound of crusted snow off a spruce branch, and riffle the loose bark on the white birches.  As we passed the truck road that cut off into the woods about a quarter mile up the road, we could hear a squirrel up in a big pine tree, loudly chattering away.

Up further, at the corner of the Bartholomew Road and the dump road, was a lonely little house where Glornie Ferguson used to live.  We always liked Glornie.  She was a short, plump, grandmotherly woman, who was always pleasant, and would tell funny stories and give us cookies.  And she would really listen to the little kids, and make us feel important.  I remember that years ago, when I was maybe five years old, she asked a group of us little kids what we wanted to be when we grew up, and when I said I wanted to be in the circus and be a tightrope walker, she didn’t even laugh at me!  But Glornie had died, and now her little house was empty, with the windows broken out by rocks, and the roof had caved in over the years with the weight of snow. 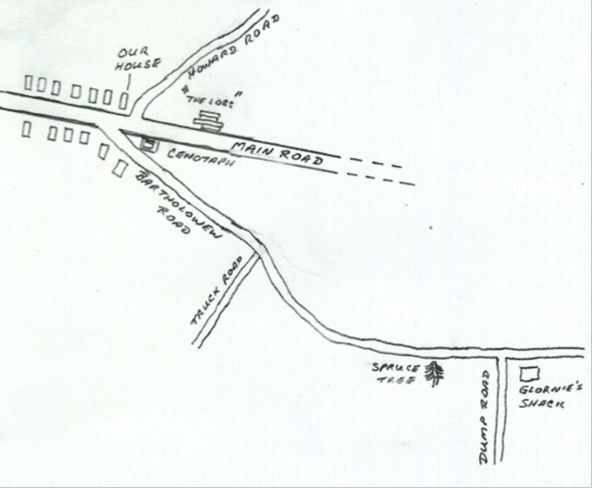 We climbed over the snow bank and followed Dad into the woods on the snow-packed trail he had made earlier when he had cut the trees down.  We were careful to walk on his packed footprints as much as we could, because if we strayed off them, our feet would sink into the soft snow, and we’d end up with snow in our boots.  And if our boot got stuck in the snow we’d have to pull our foot out of the boot, then reach down and pull out the boot and shake the snow out of it, while we balanced on the other foot!

Johnny and Alton and I pulled the lengths of wood that Dad had cut out to the side of the road one piece at a time, by either hugging it to us with both arms, or gripping it by a short piece of limb and dragging it after us.  Of course, Dad could easily heft a couple of pieces over his shoulder at one time, and trudge through the snow to the snow bank at the side of the road.

When we were finished hauling the wood to the roadside, Dad asked us to go back into the woods a little ways with him, and he used his big pocket knife and cut a piece of spruce gum off a tree for each of us.  The lumps of spruce gum were hard at first, but once we chewed it a bit, it softened up.  Of course, it didn’t chew as easily as a piece of Bazooka Joe bubble gum, but it wasn’t bad, once you got used to it.  And it had a real tangy spruce flavor.

After we got back to the side of the road, we jumped down off the snow bank and were stomping our feet to shake the snow off our pant legs and boots, when we looked up the road and saw a big moose come out of the dump road by Glornie’s old house.  It didn’t have any antlers, so we didn’t know if it was a cow moose, or a bull moose which had shed his antlers after the mating season.  But he was big!  He must have been six feet tall at the shoulders, and he had a big flap of hairy skin hanging down under his bulbous nose.  And he was just standing there casually looking down the road at us.

Well, me and Johnny and Alton started being silly and making fun of the moose just for the fun of it.  We were jumping up and down and waving hysterically and taunting him:

So we were laughing and having foolish fun – until the moose started running down the road toward us!

Remember the Looney Tunes cartoon, when there was a mad raging bull?  Where he ran past, and then screeched to a halt in his tracks?  Then he turned and eyed his target, bowed his head with those two big horns, and snorted puffs of smoke from his nostrils?   And the bull had a huge torso, with small hind quarters?  Then with furrowed brow and hate in his eyes, he pawed at the ground with his hoof, then reared up and prepared to charge head on?  And you just knew that he was going to come on like a battering ram, and could demolish whatever he hit?  And as he charged forward with his hooves pounding the ground, you’d hear the sound of a freight train?

Well, that was our moose!

And here he comes!!!

I swear we could see steamy breath pumping out of his nostrils as he charged down the snow packed road toward us, like a steaming locomotive!  His muscled shoulders bunched rhythmically as his front legs pounded the road!

Well, we sure didn’t have to be told twice!  We ran across the road, clambered up the opposite snow bank, and grunted through the deep snow as fast as we could to get to the big spruce tree on that side.  The three of us grabbed the nearest low branches we could, and began to climb!  I knew that a moose couldn’t climb trees, but I climbed like he could have!  I swear, I passed Johnny and Alton on the way up the tree!  While we were climbing, Dad stood at the base of the tree with his axe.

After a minute, we looked through the tree branches, and watched as the big moose stopped running.  He stood there and stared at us a second, then climbed over the snow bank and plodded through the snow back into the deep woods.

Once we knew he was gone for sure, we climbed back down the tree, stomped the snow off our boots again, and pulled spruce twigs from our hair.

We could now laugh about our experience, but as we walked back down the road to home, we couldn’t help but wonder:  What was that moose so riled up about?  Was he upset that we were calling him a nincompoop?  Didn’t he know we were harmless and just being silly?  Why was he so touchy?  Why was he so mad?  What the heck had made that moose so darned sensitive?

0 Responses to The Sensitive Moose