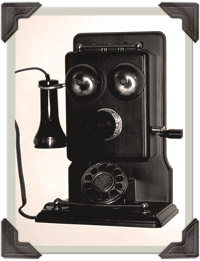 It was at Blackville that some of the largest saw mills were established and for many years this community was a prosperous lumber and trading center.

As early as 1889, Dr. F. L. Pedolin, formerly a physician at Blackville became interested in telephone development and he, along with others, purchased the Newcastle telephone exchange from the Miramichi Telephone Company which at this time was doing business in Chatham and Newcastle. One of the first moves of the Newcastle Company was to build a line from Newcastle to Red Bank to Blackville.

In 1907, G. M. Grindlay, editor and proprietor of Blackville Printing, installed a telephone system in Blackville with some 20 odd subscribers. The Grindlay exchange extended from Upper Blackville to Renous Bridge with several spur lines and connected with the New Brunswick Telephone Company’s toll line at Morehouse Siding. The exchange was situated in what was known as “Grindlay Store Building” and Miss Jennie Bean, eldest daughter of Simon Bean, was the first operator. Upon the death of G. M. Grindlay, Simon Bean became the administrator of his estate and the telephone exchange was moved to a store occupied by Mrs. James Bean, mother of Simon Bean, situated on the opposite side of the road from the present location.

In 1913, Simon Bean sold the Grindlay telephone exchange to the New Brunswick Telephone Company. The Company’s exchange was installed in Mr. Simon Bean’s residence. Mr. Bean became the company’s agent. The original number of subscribers was 44. The exchange remained in this location.

Mr. Simon Bean, who for many years had been prominent in the affairs of Blackville died in 1943 and his daughter, Miss Beatrice Bean, took over the agency. Mrs. Simon Bean, who with the assistance of her daughters, had operated the Blackville Exchange ever since its installation in 1913.