When the regular paper boy Terrence Walls leaves Blackville for college, fifteen year old Pat takes over his paper route in the next installment of his memoir, Memories of a Boy Growing Up in Blackville.

Terrence Walls had a paper route, delivering The Telegraph Journal to the paper’s subscribers in Blackville. Since he was leaving home for college, he had asked me last summer if I wanted to take up the job of being the paper carrier, and I readily agreed.

Bundles of newspapers dropped off by the delivery truck

The number of newspapers required to be delivered to my customers was delivered to my house by a truck driven at night from Saint John, after the presses stopped. There were usually a few extra papers included in the bundle, which I could hopefully sell along my route. And if those extra papers were left unsold, all I had to do was cut the headings off the paper and mail them back to the Telegraph Journal office in Saint John for a credit. And each week I’d receive my commission payment in the mail.

While the driver slowed down as he got to our house, a helper would grab the bundle of papers that were labeled for me, and fling the twine-tied package out of the truck and into our driveway, while the truck was still moving.

After retrieving the bundle of papers from the front of the driveway, I’d cut the cord holding the bundle together, and insert them into my soft canvas carry bag, which had a wide over-the-shoulder strap, which sure came in handy in carrying the heavy load. 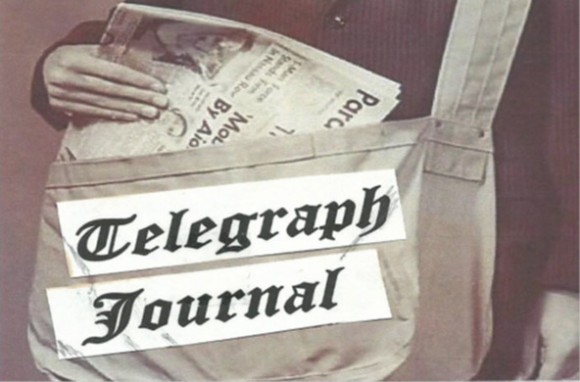 A canvas newspaper carrier bag, similar to the one I used to deliver the Telegraph Journal

I’d start my delivery route from home early in the morning, with the heavy canvas bag full of folded papers slung over my shoulder. After going down the hill, I’d walk up the Station Road a ways to my last customer on that road, then turn around and go down the Back Lane. My last customer on the Back Lane was about three quarters of the way down, so I’d usually take a short cut through their back yard, and cross over to the Main Road, just below Russ Underhill’s place. Then I’d continue down the road, over the Mill Bridge, and up the School Lane to my last customer’s house. Once I’d finished delivering the papers to all of my customers, I’d head back home with an empty bag. And then I’d get ready for school. 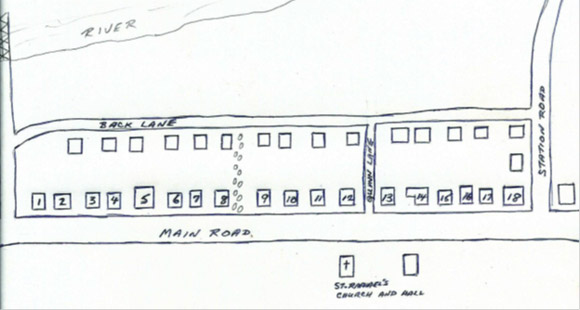 The above rough map illustrates the shortcut I took behind the houses between the Back Lane and the Main Road.

My best recollection of the houses fronting the Main Road:

I was glad to take over Terence’s paper route and earn the extra money, since the only money I was earning at that time was the change I got from Jim MacKenzie for paying me for going to the store for him, and from picking up bottles by the side of the road and taking them down to Jenny’s store to cash them in for a few pennies each. So the money earned in delivering the paper sure came in handy, providing me with a steady source of spending money. Also, I bought everyone in the family some nice presents at Christmastime. I remember being so proud when Dad said I was Santa last year!

And at Christmas time, many of my regular customers would give me a tip, which was sure helpful and appreciated. But I remember the time when one of my customers down the Back Lane said that she had a Christmas tip for me, and asked me to come back later and she’d give it to me. But when I went back to her house later, for some reason she appeared very uncomfortable as I stood at her back door. Then she hesitated, went back into the house, and came back out and gave me an opened bag of candy!

I wondered later if she felt that she had to give me a tip because another customer said they were going to tip me. But then she realized she didn’t have the money, so she ended up giving me an opened bag of her family’s Christmas candy! While I was disappointed that I didn’t get a cash tip, it wasn’t necessary at all that she give me one. So the whole experience was awkward for me, and for her too. Anyway, I thanked her and took the candy home.

I remember too one winter month when I was doing my route, when I hesitated before taking the shortcut from the Back Lane to the Main Road. I just couldn’t tell from looking at it from the Back Lane, whether the snow in the back yard field behind the house was crusted over and good to walk on, or was deep with soft snow that should be avoided. And I knew from past experience that the low-lying grassy field sometimes held water from a rain and could be soggy to walk on.

Well, there was no way to judge what was under the snow from the distance of the road, and I did want to take my shortcut. So I took a chance, and started walking through the field. Then realized – too late – that the snow was soft, with nothing but watery slush underneath! By that time, there was no sense in turning back, because I was already halfway across the field. And with each step I took, my foot went down deep, with the watery cold slush almost suctioning my boot off! And it was so slow going, because I had to pull the one foot out before I could place it in front of the other one, and do it all over again. I was tired out, with cold soaking wet feet by the time I got to the Main Road! And I still had to continue my route all the way down to the School Lane!

And another day that I remember very clearly was the morning I woke up to find Dad in the kitchen, laying out wet pages of the newspaper on the table and floor to dry them out. The twine had apparently broken when the bundle was thrown from the delivery truck, and a number of the papers had come apart, with some of the pages fluttering down the road and into the wet snow. Dad had gone out in the cold winter dawn and retrieved them, and was drying them and putting the pages together, and stuffing them in my paper bag for me, so I’d be ready to go on my early morning paper route.

And the darned thing that bothers me to this day is that after doing all that for me, I don’t remember if I told Dad: “Thank you”!

Posted in A Boy Growing Up In Blackville, Blackville, Blog, Genealogy, My Story, Recalling the Past and tagged family history, heritage, local people, memories