The story began sixty-four years ago with three-year-old Pat Fournier sharing his earliest memories of the quaint little village he called home. For the past thirty seven weeks, we followed Pat’s story as he progressed from a five-year-old boy wearing a cartoon mask from the back of a corn flakes box, to an eighteen-year-old graduate of Blackville Rural High School. Along the way, Pat shared memories of the people and places of his childhood, and introduced us to a plethora of memorable characters. In this final installment of his memoir, “Memories of a Boy Growing Up in Blackville”, Pat looks back on his life growing up here in the village and reflects on the changes that time brings.

There’s a famous quote that says:  “You can never go home again”.

That is so poignantly true!

The white two-story schoolhouse that was Blackville High and originally housed all of Blackville’s students from grades one through twelve, is now demolished.

The mill is gone now, destroyed by fire in 1973.  A community park is now spread out where the mill, and the bark, sawdust, and lumber piles used to be.

Surprisingly, the Bartholomew River is gone as well!  Once the mill dam was removed, the river that was backed up behind it was reduced to a small stream.

The steel girder bridge that used to cross the Bartholomew River is also gone.  It’s been replaced by a curving concrete span that passes over the School Lane down below.

Frenette’s Restaurant is gone, as is Tuzo’s store, the Urquhart sisters store, Fred Crawford’s garage, and a number of houses that I used to pass by on the way to school.

St. Raphael’s Roman Catholic Church is still standing.  But in accordance with Vatican Two instructions in the late 1960s, was severely renovated so that the priests, who were no longer required to say the mass in Latin, faced the congregation, rather than stand with their back to them.  The ‘renovation’ resulted in the removal and destruction of the beautiful altar.  It was replaced with a simple altar table, with a drape hung up behind it.  The entire upper balcony was removed.  And the large rectory house that stood across the lawn from the church, and behind the hall where I watched those black-and-white movies and enjoyed the St. Patrick’s Day concerts, was demolished in 1985.  It was replaced with a smaller residence and office for the priest.

Down in Underhills, the little house that we occupied for a while after our house on the hill burned down, was also destroyed by fire.  And the ‘Quinn house’, across the Miramichi River, where we also stayed for a while, has been demolished.

And back up on ‘the hill’, the house that Dad built was also destroyed by fire.  And so have Hennessey’s house, and old Mr. and Mrs. McLaughlin’s house.

The unpaved dusty Bartholomew Road that I walked so often, and where I took my first solo unlicensed drive in Dad’s car, is gone.  It has been fully reclaimed by the forest, and is now grown over by trees.

And the strangest thing of all!!  ‘The hill’ isn’t there anymore!  Is it possible that the earth has ‘settled’ over the years?  While there is still a slight rise in the road down below what used to be Hugh and Edna McLaughlin’s place, there’s no steep incline anymore!  I can clearly remember how we used to stand out in front of our house and watch as Dad came home from work and walked up the hill:  first we would see his hat, then his head, then his shoulders, and more and more of him as he ascended the hill, until we could see him from head to foot.    Or is my memory clouded by the fact that the hill appeared to be so steep because I was so little, and saw the hill as being so big with my childhood eyes?  No, I don’t think so.  It was there.  It was there.  And now it’s gone.

So everything changes over time.

And you can’t go home again.

But the memories endure. 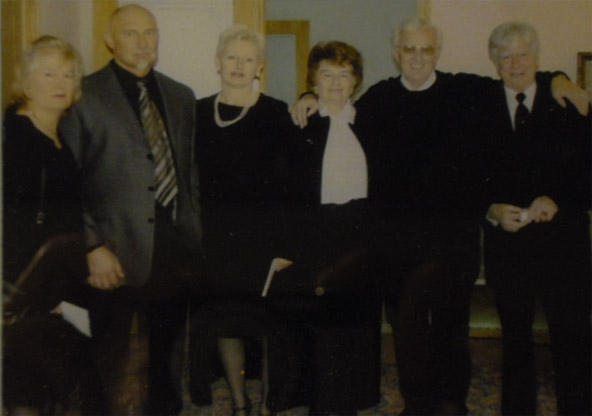 The six Fournier children.
This picture was taken in November 2007, as we gathered for our loving mother’s funeral. She was eighty-seven years old. Dear Dad passed away nineteen years earlier, in September 1988, at the young age of seventy-one. Marjorie, 63; Leonard, 51; Leslie, 49; Katharine, 65; me, 60, and Johnny, 61. 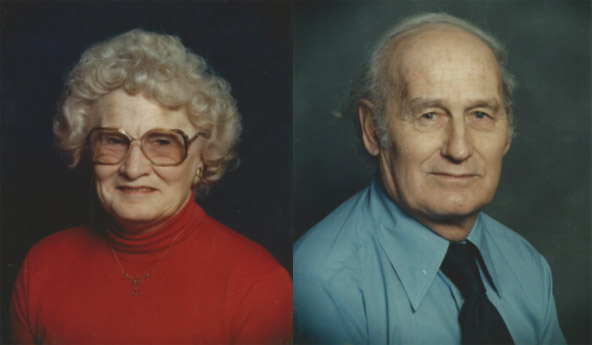 In the opening words to this memoir I stated that I was dedicating it to the memory of Mom and Dad, and that ‘there are not enough words to express my appreciation and love for them, for their hard work and unwavering devotion to me and my brothers and sisters, to ensure that we grew up in a family of love, with the best care and upbringing they could provide’.

I trust now that the reader of my stories has gained some understating and appreciation of just how devoted our parents were to our upbringing.  But thinking I may have failed at that, I attempted to put together some additional words here to help describe their character, their nature, their qualities – their spirit – as they looked after us so lovingly during our childhood years.

But while I tried over and over again, any words I came up with were just words.

You had to have known them as we knew them.

But me and Leslie and Leonard and Johnny and Marjorie and Katharine knew them.

And loved them until the day they died.

And will continue to love them – until the day we die.

REMEMBER…..
by Pat Fournier
As I look back on the life I’ve lived through to this point in time,
Fondest memories are of my childhood, and they are treasures in my mind.
And I wonder at the things we did, and the fun we had back then,
These memories that prompt to ask the question: “Do you remember when……?”
Do you remember playing softball, with a board Daddy carved for a bat?
And running to tag the rocks and trees, which was where the bases were at?
And we all wanted Pat to be on our team, ’cause he could hit the ball so far,
That someone had to look for it, in the trees beyond the yard.
The score wasn’t that important, as we played ball with our friends,
Until the daylight turned to darkness, and our mothers called us in.

Remember swimming at ‘The Red Gate’? Flattening pennies on the railroad track?
Hula hoops?  Hatfield potato chips?  The swing tree in the yard out back?
Change cups swinging on overhead wires, down at Tuzo’s grocery store?
The white over-the-shoulder uniform belts, that the ‘School Patrol’ boys wore?
Going to sock hop dances, and learning how to twist, and jive?
Cinch belts, and penny loafers?   Putting vinegar on Frenette’s French fries?

Remember the Halloweens we had?  We’d plan for them for weeks;
Planning costumes that we’d make ourselves, but they were secrets we couldn’t keep.
And we’d laugh so hard that the tears would surely roll down from our face,
Seeing Johnny and Ronald in dresses, made up in rouge and lace.
And is Johnny’s prank still secret, or has it been told before,
How he pulled the front step clean away from Marie MacKenzie’s door?

Remember the St. Patrick’s Day concerts, held in the Catholic Church hall?
Allan Washburn would sing “Irish Lullaby”, with top hat and cane and all.
And Monica Donahue, behind the scenes, would prompt the actors their lines,
While chocolate, walnut, and angel fudge, was sold in a bag for a dime.
And between the acts we’d run to Urquhart’s store across the road,
To buy our pop and treats and stuff, then rush back to enjoy the show.

Do you remember all the games we played: Giant Steps?  Tag?   Red Light?
Remember Daddy’s chickens?  And the licorice pipes he liked?
Remember the ‘Theme From A Summer Place”?   “Hit Parade” on TV?
And our milk frozen solid, out on the step, with its little cap of cream?
Do you remember going fishing, up at Underwood’s little brook?
And Marjorie scared of the wiggling worms, and Daddy baiting her hook?
Remember picking blueberries, up in the field where horses grazed?
We’d head out packing a picnic lunch, having planned to spend the day.
And “I’m dumping!” shouts proclaimed to all that we had emptied out our cup,
Adding our clean-picked berries to the bucket filling up.
And if by chance we had more berries than our Mom could ever cook,
We’d sell some, going door to door, to buy our second-hand schoolbooks.

Remember Mass on Sunday mornings, done up in our Sunday best,
And to communion (after Friday’s confession, our little sins confessed)?
And Lenten evenings saying the rosary, and trying hard not to giggle,
As Mommy strictly looked our way, (but we were only very little!).
And Father Nowlan jingling pocket change, looking sternly at us all,
At the Saturday afternoon cowboy shows, down in St. Raphael’s hall?

Remember our two-story schoolhouse, and the smell of Dust-Bane on the floor?
Remember Mr. Green, in his stocked-up van, selling clothing door to door?
Do you remember Mommy’s brown bread, still hot right from the pan?
And skating on Bartholomew River, burning tires to warm our hands?
Lime ricky pop?  And poodle skirts?  Katherine’s ‘Roy Rogers’ guitar?
Getting buckets of water from the hand pump over by Jim MacKenzie’s yard?

Remember the concert we made ourselves, in our shed one summer day?
We charged each kid a nickel, and our Moms even came to the play.
Seems there’d been a murder, as the ‘body’ lay on the floor of the shed,
And Mrs. Walls laughed, as did we all, at “Poor Teddy, still laying there dead”.
And Katherine, she being the murderer, was arrested for the crime,
When Patty, the Mountie, took her away, but he forget to say his lines!

Remember the culvert that went under the road, connecting both the ditches,
And crawling through, one side to the other, putting Mommy in nervous stitches?
Our house was on one side of the road, with Aunt Greta’s on the other,
And even old Laddie’d crawl through with us.  (Thank God we didn’t smother!)
Then as if to prove for certain that we were lacking in any sense,
We’d dare each other to touch a finger to Hennessey’s electric fence!

And remember the sliding hills that Daddy made with piled up snow?
We’d clamber up with cardboard ‘sleds’, and laughing, down we’d go!
And remember the Christmas times we had?  Such good times that we shared!
We’d hang the balls on the Christmas tree, and Mommy hung the angel hair.
And walking down to Midnight Mass, with snow crunching ‘neath our feet!
Ah! Those silent nights of long ago will never again repeat.

These memories dear have surely helped in the making of who we are,
And what we’ve become and learned and done have taken us this far.
And all of these, and many more, are memories I fondly cherish,
Of the times we had, back in our youth, in our little Blackville parish 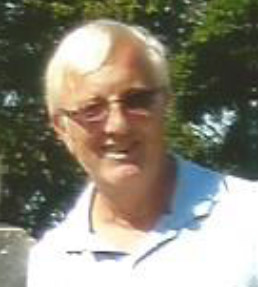 Click here to read “Memories of a Boy Growing Up in Blackville” from the beginning.