It’s the summer of 1956 and Pat Fournier’s uncle Stan has purchased the first television in his neighbourhood. In this eleventh installment of his memoir “Memories of a Boy Growing Up in Blackville”, Pat recalls the Saturday afternoons spent at Stan and Greta’s house watching Roy Rogers and Rin Tin Tin.

THE FIRST TV ON OUR HILL
Written by Pat Fournier

Uncle Stan was the first one on our hill to buy a television for his home.  It was a large floor model TV, which carried only two black and white channels, the CBC and the CTV.  Well, three if you counted the test pattern!  The test pattern picture was used when you had to adjust the horizontal or vertical hold of the television pictures, by turning the control knobs in the front of the television set.

A 1956 Philco floor model television, and the test pattern image. If the picture on the TV appeared to be unnatural and distorted, then this test pattern channel picture could be used as a model to adjust the vertical or horizontal imaging of the picture

The television picture signal was delivered to the TV through a flat two-pronged brown wire that was connected to screws at the back of the set and then strung out through a small hole usually cut in the window frame, to a large multi-pronged aluminum antenna that had to be mounted on the roof of the house.  The antenna had to be attached upright to the chimney with some strapping, and held erect with some strong wires strung from the antenna to hooks embedded in the corners of the roof. 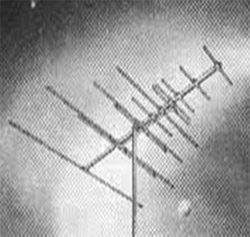 A typical television antenna. Once televisions became popular, these antennas could be seen sprouting from the top of most houses in Blackville.

Hopefully, once the antenna was in place and pointing toward the signal being transported over the airwaves, the antenna didn’t have to be moved again.  But that wasn’t always the case!

I remember the times when Uncle Stan could be seen standing at his open front door, keeping an eye on the snowy picture of the television set which sat at an angle in the corner of the living room by the front windows, as he shouted instructions up to someone who had climbed a ladder to the roof to turn the antenna this way or that until the picture improved!  “Turn the antenna a little more!  The picture’s getting clearer!  A little more!  OK!  Hold it!  Hold it!  That’s good!  Leave ‘er right there!”

And on Saturday afternoons we’d all take a break from playing tag, or cowboys and Indians, or cops and robbers, and head into Stan and Greta’s house to watch the Roy Roger’s show or Rin Tin Tin.  The living room would be full of us kids on the couch and chairs and squatted on the floor, with our eyes glued to the set, as we watched Roy Rogers and Dale Evans or Rin Tin Tin go chasing after the bad guys!

And lots of times we could hear Aunt Greta back in the kitchen, and smell the delicious aroma that came from her cooking up a batch of her delicious sugar donuts or molasses cookies.  Then when the show was over, she’d say to us:  “OK, time to turn off the TV now, and go back outside and play.  It’s a nice day outside.”

Posted in A Boy Growing Up In Blackville, Blackville, Blog, My Story, Recalling the Past and tagged family history, heritage, local people, memories