It’s the winter of 1963 and Pat’s father Sylvernus is working at the mill in Newcastle. In the twenty-seventh installment of his memoir, the fifteen-year-old boy recalls a cold January morning when his dad has just hitchhiked a ride home from work.

It was well after midnight, probably around two in the morning, when I was awakened by some muffled noises in the kitchen.  There was no wooden door separating my bedroom from the kitchen, only a full length curtain that Mom had sewn and hung on a cord to provide some privacy, and to help reduce the glow from the kitchen light.

Mom had stayed up to wait for Dad, who had apparently just gotten home after working the four to midnight shift at the mill down in Newcastle, twenty miles down the road.  Since he didn’t have a car, he got a drive to work most times by a friend also going into Newcastle, but often had to hitchhike back home after working his shift. 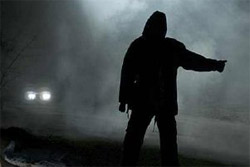 A man hitchhiking on a dark snowy night

As they talked in hushed voices, I heard him say to Mom:  “It was so cold standing out on the road thumbing a drive home, that I almost froze my bird!”

No, I didn’t find it funny.

I pictured Dad standing out by the side of the road in the freezing cold, with his lunch pail tucked under his arm.

Probably with his shoulders hunched in against his collar, and stamping his feet to keep warm, as the cold wind whipped against his head and ears.

Maybe walking up the road a bit sometime, instead of just standing there.

Holding out his thumb when he saw headlights approaching.

And praying that one of the few cars that were driving by in the dark of night would stop on that snow-drifted road, and take the chance on picking up a stranger.

No, I didn’t find it funny.

I went back to sleep loving him.

Posted in A Boy Growing Up In Blackville, Blackville, Blog, History, Memories, My Story, Recalling the Past and tagged family history, heritage, local people, memories