It’s the summer of 1963 and Pat Fournier’s Sturgeon grandparents are down from Dalhousie for a visit. In the next installment of his memoir, the sixteen year old boy recalls his Dad’s retelling of a story about Barry MacKenzie to his visiting family in “Grandpa and the Buttons”.

GRANDPA AND THE BUTTONS
Written by Pat Fournier

Grampa and Granny Sturgeon and Aunt Patricia came down from Dalhousie to visit one week.  Granny was a big woman, and constantly had a little smile on her lips, and was always humming a little tune.  Her daughter, my Aunt Patricia, was kind of big too, and I think maybe in her late teens or early twenties.  She and my brother Johnny were like two peas in a pod; they always seemed to find the same funny things, and often laughed with each other, and had a great time together.

Grampa was a big man, and I remember he had big rough hands, I guess from working at the mill all his life, and outdoors in the hayfields and in his barn with his horse and wagon and farm gear.  He had a very dry sense of humour, and sometimes you couldn’t tell if he was joking or not.  But he sure did enjoy a good laugh.

Well, one day Dad told Grampa a story about the time when Barry MacKenzie, a friend from across the road, came over for a visit, and Dad offered Barry a little glass of wine.

“I don’t think you’ve ever met Barry”, said Dad.  “He lives in the house next door to Greta’s, and he comes over some times for a visit”.

Grampa was sitting at the end of the kitchen table, with his chair turned sideways to focus on Dad telling his story.  While his right arm rested on the kitchen table, his other arm rested on his left knee, and I again noticed his habit of rubbing his thumb and forefinger together.  I could almost hear his big rough fingers rubbing against each other.  It brought back memories of him driving his hay wagon, and I could picture him holding the horse’s reins loosely between those same fingers.  Grampa wasn’t fat, but I guess what you’d call ‘thickset’ or ‘beefy’, so that the waist of his pants curled over his belt.  He leaned forward with a grin on his face, listening intently and focusing on Dad telling his story.

Dad was sitting in his big rocking chair beside the kitchen stove, which was where Barry was sitting when he came over for a visit one evening.

I loved that big wooden rocking chair!  It used to belong to Dad’s father.  It was stained black, and had a wide and deep curved back, and a nice comfortable seat that curved inward at the front, where your knees would be.  I remember one Easter-time years ago, when me and Johnny were little, when we sat on Dad’s knees, and he rocked in the chair as we sang to him:  “Here comes Peter Cottontail, hopping down the bunny trail; hippity hoppity Easter’s on its way…”

But Dad’s father had died, so it was Dad’s chair now.  And I think that every visitor who came to the house and sat in the chair knew that the chair was special, and that it held a place of honour in our kitchen.

So now, Dad sat in the chair and told Grampa his little story about Barry.  Dad was enjoying Granny, Grampa, and Patricia’s visit, and was getting as much of a kick now out of telling his story as Grampa was having in hearing it.  It was after supper, and Dad was relaxed, and had his slippers on.

“Now, I’ve never known Barry to refuse a drink of wine”, said Dad, “but when I offered him a drink, he made out like he was having a hard time making up his mind!”

As Dad told the story, he mimicked how Barry sat in the big rocking chair.  Like Barry, he fidgeted around restlessly, shifting an elbow on one arm of the rocking chair, then the other, and then crossing one leg over the other one, as he ‘made up his mind’.

“I don’t know that I’ve ever seen anyone having such a hard time making a decision!” exclaimed Dad.

“Well, now, I don’t know!”, whined Dad, trying his best even to imitate Barry’s voice, as he scrunched up his face a little, as Barry had done.

“Oh yes!  He made quite the show of being uncertain about whether or not he should take a drink!” Dad continued.   “Then he took hold of the front of his shirt” – and at this, Dad did illustrated what Barry had done, by grabbing the front of his plaid shirt with both hands – “and seemed to be wringing it in frustration as he tried to make up his mind!”

Grampa was smiling broadly, and getting a kick out of watching Dad imitating Barry.

But as Dad impersonated Barry and twisted the front of his shirt with both hands, one of the buttons popped off!

Well, you should have seen Grampa laugh!

Barry hadn’t popped a button off his shirt when he mulled over whether or not he should take a drink of wine.

But Dad popped a button off of his shirt when he told the story!

I think Grampa laughed and smiled to himself for the remainder of his visit, as he replayed in his mind how Dad mimicked Barry in telling the story.

And I knew Grampa would laugh again when he retold the story to others, about how Dad popped the button off his shirt! 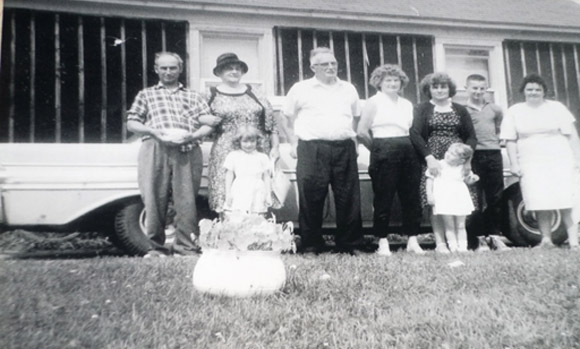 Dad, Granny, Grampa, Mom, Aunt Greta, me, and Aunt Patricia. The two little girls in front are my little sister Leslie, and Aunt Greta’s daughter, Colleen. Note the chamber pot that Dad’s holding in his hands. He went and got the pot to pose with before the picture was taken. And Granny laughed and laughed!

Posted in A Boy Growing Up In Blackville, Blackville, Blog, History, Memories, My Story, Recalling the Past and tagged family history, heritage, local people, memories