It’s the fall of 1956 and nine year old Pat is in trouble for tripping Lana Garwood in Mrs. Stephens’ class. Unbeknownst to him at the time, the antic is actually payback for an incident that occurred three years prior. Got Ya Back! is the twelfth installment of Pat Fournier’s memoir, Memories of a Boy Growing Up in Blackville.

GOT YA BACK!
Written by Pat Fournier

My grade four class shared the same room with the grade five students in the big white two-story school, and Mrs. Stephens taught both classes. 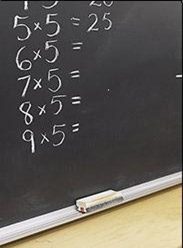 During class one morning, Mrs. Stephens was calling students one by one up to the blackboard to do arithmetic exercises.

As one of the grade five girls who sat in the row behind me passed by me in the aisle, I stuck my foot out and tripped her!

Well, she fell down flat in the middle of the aisle!  However, she didn’t seem to hurt herself, and she looked back at me strangely as she got up off the floor.  Mrs. Stephens knew that I did it, and sternly asked me why, but I just shrugged my shoulders.  My punishment was that I didn’t get to go out to recess that day.

But the funny thing is that I found out later that the grade-five girl that I tripped was Lana Garwood, and she was the pale faced girl who drove her tricycle into my balloons and busted them during the tricycle parade in the Coronation day festivities three years ago!

I have no idea what possessed me to trip her, other than to see what would happen!  And I don’t know why I chose that moment to trip that particular girl!  And I wouldn’t even have known who it was who was coming down the aisle behind me when I stuck my foot out!

I just did it on impulse, and that’s all there was to it!

But then I found out that she was the one who busted my balloons!

Was it fate that she would be the one I tripped?

I don’t know!  I don’t know why it came about that she was the girl I tripped!

But I do know I couldn’t help thinking after I found out it was her:

Posted in A Boy Growing Up In Blackville, Blackville, Blog, My Story, Recalling the Past and tagged family history, heritage, local people, memories