It’s the Spring of 1964 and seventeen-year-old Pat Fournier is anxious to get his driver’s license. In the thirty-second installment of his memoir, Memories of a Boy Growing Up in Blackville, Pat ‘borrows’ the family car with unexpected consequences.

The second-hand blue Vauxhall that Dad bought last year was the first car he’d ever owned.  However, Dad was still learning to drive and didn’t have a driver’s license yet, so he would get friend Harold MacKenzie to drive the car for him when he had to go somewhere that was too far to walk, like down to Newcastle to get groceries.  And even though Dad worked at the mill in Newcastle, he left the car home and got a drive with a friend, or hitchhiked to work.  So the car sat in the driveway a lot.

I would often sit in the car and pretend to drive.  And sometimes, when there was no one around, I would put the car in gear, let out the clutch very easily, and just let the car coast across the lawn and around the swing tree and back to its spot in the driveway again.  I couldn’t wait to get my driver’s license!

A 1950’s Vauxhall, very similar to the one Dad owned

Then one day when I was home by myself, I decided to take the risk of driving it out of the yard, instead of just putting the car in drive and coasting around the lawn.  I took the key from the little dish on top of the fridge, and got in the car and turned the ignition.  I shifted into first gear, let out the clutch, hesitantly pressed the gas pedal, and drove the car out of the driveway and across to the Bartholomew Road.

As I started up the dirt road, just coasting along at a slow twenty miles an hour, I thought to myself:  Hey, this isn’t so hard!  There were seldom other cars on the dirt road, unless someone was going up to the dump, or driving all the way up to the covered bridge that crossed the Bartholomew River, and then up further to a small settlement.  So I had the road to myself.  And being fairly nervous, and with the road not as wide as the paved Main Road, I kept pretty much to the middle.  I drove past the new Boy Scout camp, and around the turn by the logging road.  Then I continued on further past the entrance to the dump road, and the sagging weather-beaten remains of Glornie’s little house.

Having gained a little more confidence, I applied a bit more pressure on the gas pedal, and noticed in the rearview mirror that I was raising a little cloud of dust behind me.  And I soon began to wonder where I could stop and turn around, because there weren’t that many culverts over the ditches on the sides of the road where I could easily turn in, put the car in reverse, and change direction to head back home.  I knew that the wooden covered bridge over the Bartholomew River wasn’t too far up ahead, and to the left of the bridge entrance there is a big open area where I could easily turn the car around.  But I also remembered that that low lying grassy area was often soft and swampy at this time of year, and I sure didn’t want to take the chance of going in there and getting the car stuck. 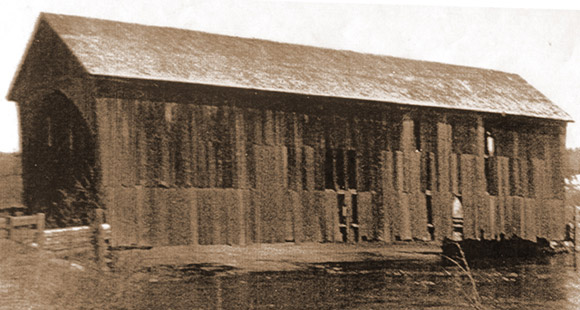 The Bartholomew River covered bridge.
The bridge did not appear to be in such poor condition during my childhood.

So with the bridge in sight now, I decided to turn around in the road itself.  There were no cars coming in either direction, so I had the road to myself and could take my time to turn around.

I slowed way down, and turned the wheel smoothly to the right, so that the front of the car was close to the ditch on the right hand side of the road.  Then I turned the wheel hard to the left, to point the car at an angle toward the ditch on the left.  I gently pushed in the clutch and applied the brake, and came to a stop, with the front end of the car just touching the alder bushes that were growing in the ditch.

Now I had to back up!  And I’d never backed the car up before, since all the driving I’d ever done was just coast around the yard with the car in Drive.

So I pushed the clutch in again, pushed the gear shift on the steering column up to Reverse, and slowly let out the brake.  I turned the wheel to the right so the car was basically perpendicular to the road, and continued gently backing up – and felt the rear wheels go down into the ditch!  I had backed up too far!

I braked hard, and sat there, with the car tilted at an angle, looking at the tops of the trees across the road!  While the ditch behind the car wasn’t deep, I knew that if the car backed up more, then the rear end would be completely in the ditch, and I wouldn’t be able to gain traction to get the car out.

Shit!  What have I done!  I’ve got to get the car out, and I’ve only got the one chance to do it!

I knew that what I had to do was to let the clutch out with my left foot and press hard on the gas pedal with my right foot, all in one smooth fluid motion.  If I gave it too much gas, or didn’t get the timing right when I pushed the gas pedal in and released the clutch, the car could stall, and roll backward.

I prayed.  I prayed like I’d never prayed before!

I took a deep breath, rehearsed in my mind what I had to do, then –
clutch out –
foot on the gas –
turn the wheel –

I could hear the rear tires grabbing at the dirt in the ditch!

The car started to move forward!

With all wheels now up on the road, and with a big sigh of relief, I turned the steering wheel so the car was aiming straight, and I headed back home.

As I drove slowly back down the Bartholomew Road, I couldn’t help thinking:  My God that was close!  And I couldn’t help but wonder:  What would I have done if I couldn’t get the car out of the ditch?  I’d have to walk the four long lonely miles back down the road to home, and then… and then what?  Look for someone with a truck and a chain to come and tow the car out of the ditch?  Find Dad at home, and explain that I got his car stuck in the ditch way up the Bartholomew Road?

As I drove slowly back, I gripped the steering wheel with both hands, and kept hoping that no cars would be coming down the road toward me, or from behind me.  I wanted to be alone on the road, without having any other cars around at all.

Finally, I was at the end of the road.  But just as I got in front of the old McLaughlin house, another car approached the entrance to the Bartholomew Road, with the intention of using the wide junction of the two roads as an area to turn around and head back down the Main Road into Blackville.  And I saw that the driver of the big Pontiac was Terry Underhill, who was a grade ahead of me at Blackville High.  Damn!  I slowed the car right down to a crawl, and waved him to go ahead and do his turn, which would leave the road clear for me.  But then he gave me the right of way, waving at me to drive ahead!  Darn it all!  Ok then, I had no choice now but to go first.  So I pushed on the gas a bit, drove into the road junction in front of his car, crossed the Main Road and into our driveway, coasted around the swing tree, and parked the car back in its original spot by the side of the house.

While I was all alone at home, so no one would know that I had taken the car, I didn’t know that Aunt Greta had been watching from her kitchen window across the road, and saw me drive the car out of our driveway.  And of course she later reported what I had done to Mom.  While Mom asked me what I thought I was doing in taking the car, and she gave me a good talking to, I knew that she would be telling Dad when he got home from work.

At first, I was mad at Aunt Greta for tattling on me, but I eventually saw her point too.  ‘Cause I knew that what I did was wrong, and she was only looking out for our family.

Later that afternoon I was on pins and needles as I sat on one of the swings, wondering what kind of beating I’d get from Dad.  I’d never gotten a beating from him, ever, but I figured I sure deserved one this time!

In fact, there was only the one time that I remember that Dad gave any of us kids a spanking.  That was a couple of years ago, when my little sister Leslie was maybe four or five years old, and I guess she did something wrong, and Dad gave her a slap on the bum.  I didn’t see him do it, but I remember afterwards Mom telling him:  “Syl, you shouldn’t have hit Leslie so hard.  She’s just a little girl, you know, and you could have hurt her”.

And I realized that Mom was making the point that it wasn’t that he spanked her hard, it was the fact that she was a girl, and she was too delicate to be spanked on the bum like that.  Anyway, Dad felt awful bad then, and he went out and sat on his lawn chair out on the lawn in the shade of the trees by the rail fence.  I don’t know if Dad motioned Leslie over or not, but when I looked out I saw her skipping over to him, and he sat her on his knee, and they had a little talk.

But this time, I figured I was in for a spanking for sure!

Dad had just gotten home after working the eight-to-four shift down at the Newcastle mill, so he was in the house with Mom, and I knew he’d know by now what I’d done.  I nervously watched as he came out of the back door.  The spring on the screen door groaned, and then slammed the door shut behind him.  He walked down the back steps and came over to me.  I just sat there, with my head down, very nervous about what was to come next.

“Did you take the car out of the yard?” he asked.

I didn’t say anything.  I just continued to sit there on the swing seat, scuffing my sneakers in the dirt as he looked down at me.

Then he turned around and walked back into the house.

I knew what he said was true.  I could have gotten him in a lot of trouble if I’d gotten the car in an accident.

As I watched him walk away, I knew that he was disappointed in me and what I had done.  But I didn’t say anything.  Why didn’t I say:  “Dad, I’m sorry?”

But instead, I just sat there, close to tears.  I felt so bad for having disappointed him.

I never felt so ashamed in all my life.