In 1957, nine year old Pat Fournier witnessed his family home burn down. In the short story below, Pat shares his memories of that time and how the family of seven overcame a tragic loss to have one of their best Christmases ever.

Burned Out
Written by Pat Fournier

Mom was down in the kitchen and yelling upstairs to us as loud as she could.  At first I couldn’t believe it, but after Johnny and Marjorie and Katharine and I quickly pulled on some clothes and hurried down the stairs, we saw that Dad had an axe and was frantically chopping a hole in the wall behind the kitchen stove, trying to get to the fire that was burning between the walls.

I learned firsthand that morning how people sometimes do peculiar things during an unexpected excitement.  The crazy thing that I did was run back upstairs, unbutton my plaid winter shirt, and button my long underwear, which I had not buttoned in my rush to hurry downstairs earlier!  As if anyone was going to know that my long johns were unbuttoned! 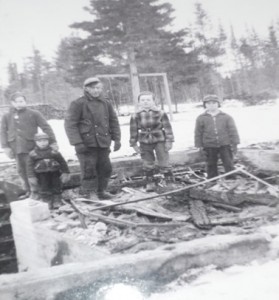 Standing in what is left of our home: Terrence Walls with his hand on Eric Underhill’s shoulder, Jim MacKenzie, Michael McLaughlin, and Dale MacKenzie. There’s our swing tree in the back yard.

We all got out of the house and ran across the Main Road and stood in John Hennessey’s driveway.  Because there wasn’t a fire department in Blackville, we stood and watched helplessly as the house burned down.  A fire truck from Renous eventually arrived, but it was too late to do anything to save our house.  All it could do was spray water on Jim MacKenzie’s house next door, so it wouldn’t catch on fire and burn too.  But thankfully, a bunch of men in the neighbourhood ran into the house while it was burning and managed to save some of our furniture.  They even put catalogues and rolled-up newspapers under the lip around the top of the kitchen stove to prevent their hands getting burned as they hauled it outdoors – – with the fire still burning in it!  They set it down in Hennessey’s driveway, where the porridge continued to cook in the pot on the top of the stove!  I learned later that as the house burned to the ground, Dad stood helplessly at the side of the road and cried.

And as we stood there watching the fire devour our home, the school bus from Upper Blackville drove by.  And as the driver slowed down, I could see that the students craned their necks and moved to one side of the bus to see the house burn.  I know that that was the natural thing to do, but I was angered at the time that those kids maybe got some excitement out of watching our house – – our home – – burn down.

I remember that after the house had burned down, we had gathered in Aunt Greta’s house, out of the cold.  I was sitting on the couch in her living room, and I guess not really realizing the gravity of the situation in my child’s mind, selfishly asked Dad if we were still going to get our weekly allowance.  And poor Dad, who had just lost our house and most of our belongings, said that yes, we’d still get our allowance.  A couple of days later, he gave me my quarter allowance, but I gave it back to him.

In the days that followed, our kind neighbours on the hill took us in, and made us welcome in their homes.  Aunt Greta and Uncle Stan took in Mom and Dad and Leonard, who was only thirteen months old.  Johnny and I were taken in by Hubert and Yvonne Underhill, but I don’t remember who took in Katharine and Marjorie.  Dad was very unhappy about seeing his family split up, but there was really no alternative.

Not too long afterwards, Dad managed to rent a little house that we could stay in, about a mile below the Mill Bridge, in a section of Blackville known as “Underhills”.  The house was small, but it was comfortable for us, and we were all together again.  And because there was a small hand pump right over the sink in the kitchen, we enjoyed not having to go outside anymore to pump our water.

One vivid memory I have of living there was the day that Johnny and I went for a slide on our toboggan down the hill in the field next to the house.  We put on our winter toques, mitts and boots, and climbed over the wire fence that separated ‘our’ yard and the hill, and plodded up the slope.  Because there was a light freezing drizzle the night before, we had to punch our feet into the crusted snow to get our footing as we climbed the hill.

Once at the top, we stopped and looked down at the house, and could see Mom in the window at the kitchen sink looking up at us.  Johnny climbed on at the front of the long six-seater toboggan, and kicked his heels into the snow to brace it for me, while I got on behind him.   Once on, I curled my legs around his waist and held on to his shoulders, then he lifted his feet up and tucked them under the curl of the toboggan.  And once he lifted his feet up, the toboggan immediately started speeding down the hill on the crusted snow.

Thinking back, we really should have known better!  Once we saw how slick the crusted snow was, we should have known we wouldn’t have any control of the speeding toboggan.  And that’s exactly what happened!  We had no control whatsoever, as we sped down the hill faster and faster.  And of course we were aimed right for the wire fence – – and the fence posts – – at the bottom of the hill!  And try as we might to slow the toboggan by pushing our feet out, we could not get our feet to grip into the crust to slow it down.  And on we sped!  And crashed right into the wire fence at the bottom of the hill!

If I could replay that ride in slow motion, I would see myself fly off the back of the toboggan, right over Johnny’s head and over the fence, landing hard on the snow on the other side.  And Johnny, being at the front of the toboggan, was hurled up and onto the fence, and actually ended up hanging over the top wire!

Mom and Marjorie and Katharine had seen everything, and came running out of the house to see if we were all right.  Amazingly, the toboggan wasn’t broken, and neither were any of our bones!  However, we did end up with ripped winter coats and even torn long john underwear, and some large purple bruises.  What a ride!

While I don’t have many more vivid memories such as that of living there, I do remember that Johnny and I made good friends with the Fortune family next door, and I remember Dad bringing me and Johnny fishing with a couple of bamboo poles in the brook that ran close to the house.  And I remember the long walk we had to make now to go to school, and the much longer walk we had to make to go all the way up to St. Raphael’s Church for Sunday mass. 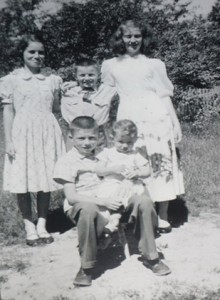 A picture of the five of us at the Quinn house. I’m thinking this was taken on a Sunday, judging by the fact that I’m wearing my Sunday tie. I’ve got my arms around my big sisters Marjorie and Katharine. Johnny is sitting on a little stool with Leonard on his knees.

We stayed in the little house in Underhills until June, when we moved again, this time, to a much larger rented house.  “The Quinn house” was across the Main River Bridge that crossed the Miramichi River, and just up the dirt road beyond the intersection of the Campbell Road and Riverview Drive.  Looking out from the top floor of the house, we could see a bit of the roof of the fishing camp on Doctor’s Island.  The Quinn house had not been occupied for some time, and was rumored to be haunted by a ghost!

All the while we were living there, Dad would come home from working at the Renous ammunition depot each day, eat his supper, then leave and walk up to the Main Road, and then up the hill to where our house had burned down in January.  And he would work there until dark on building us a new house, then walk back ‘home’ to the Quinn house, and go to bed.  He must have gone to bed dead tired those days.  And on the weekend, he’d go back up and work all day, from dawn to dusk, with a lunch that Mom would make for him.  Johnny and I went up with him on some weekends, and helped him as best we could.

One day in the fall, as all of us sat at the supper table, Mom asked us:  “What would you rather do:  have a nice Christmas staying here in this house, or move into the new house up on the hill that Dad’s been building.”  We knew that the house was still unfinished, but that didn’t matter.  Every one of us echoed:  “We want to go to the new house!”  We wanted to go ‘back home’.

So in mid November we left the Quinn house and moved up to the new house on the hill, on the same property where the old house burned down.  And we had a wonderful Christmas!  Mom and Dad made sure that Santa came, and we had one of our best family Christmases ever.

This is the newspaper clipping telling about the fire that destroyed our home. 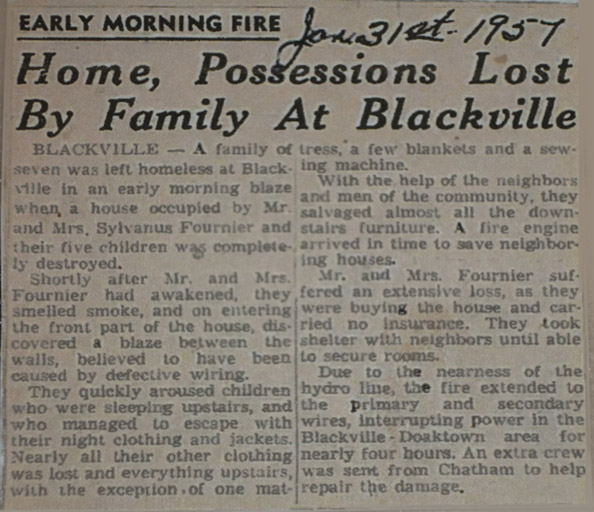 Home, Possessions Lost by Family At Blackville
BLACKVILLE – A family of seven was left homeless at Blackville in an early morning blaze when a house occupied by Mr. and Mrs. Sylvernus Fournier and their five children was completely destroyed.

Shortly after Mr. and Mrs. Fournier had awakened, they smelled smoke, and on entering the front part of the house, discovered a blaze between the walls, believed to have been caused by defective wiring.

They quickly aroused children who were sleeping upstairs, and who managed to escape with their night clothing and jackets. Nearly all their other clothing was lost, and everything upstairs, with the exception of one mattress, a few blankets and a sewing machine.

With the help of the neighbours and men of the community, they salvaged almost all the downstairs furniture. A fire engine arrived in time to save neighboring houses.

Mr. and Mrs. Fournier suffered an extensive loss, as they were buying the house and carried no insurance. They took shelter with neighbors until able to secure rooms.

Due to the nearness of the hydro line, the fire extended to the primary and secondary wires, interrupting power in the Blackville-Doaktown area for nearly four hours. An extra crew was sent from Chatham to help repair the damage.