It’s the Spring of 1958 and eleven year old Pat Fournier received the only gift he really wanted for his birthday, a Sunday Missal. In this fourteenth installment of his memoir, Memories of a Boy Growing Up in Blackville, Pat reflects on St. Raphael’s church and Father Nowlan’s uncomfortable reading of the Sunday collections.

Mom and Dad got me the only gift I really wanted for my eleventh birthday:  a Sunday Missal to help me follow Sunday Mass.  On the pages on the left side it explained what the priest was doing, and everything that he was saying in Latin.  On the pages on the right side, it gave the English interpretation. 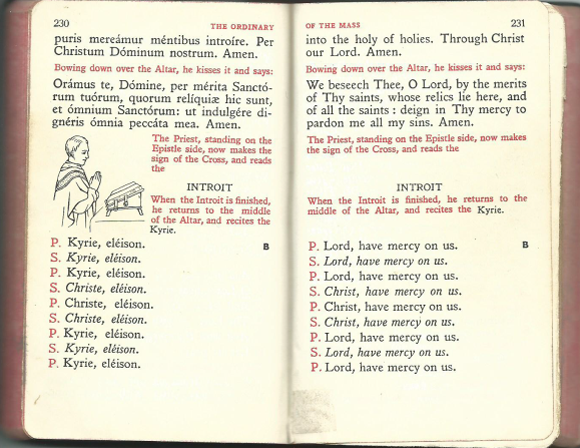 Over the years, the members of the congregation at St. Raphael’s got used to many of the Latin phrases, and could even follow along with the priest, and with the choir when they sang a Latin hymn.  And I had gotten used to some of the Latin too, and I could easily see what the priest was doing from my family’s vantage point up on the balcony that overlooked the altar.  But while the Mass was conducted in Latin, Father Nowlan would of course read the gospel and say his sermon in English.

I remember that the impression I always got of Father Nowlan was that he seemed to me to be preoccupied with money!  And a clear memory that I have of him that emphasized that notion in my young mind was that when he walked by you could always see him jingling the change in his pocket!

And each year, in January, instead of a regular sermon, Father would read out a financial statement of the church, which included his reading aloud a listing of the amount of money the men of the parish had contributed to the church in Sunday collections over the past year, with the list being in order of the most money contributed, down to the least.

There was a man and woman who sat in the pew that was closest to the altar, and the man’s name was always at the top of the list.  I know they didn’t have any children, because they always sat by themselves in the front pew, so he didn’t have a family to support.  And he must have had a job that paid a good wage too, to contribute as much as he did to the church, and always end up being named first on the list.

But Dad’s name was always towards the bottom.  As Father Nowlan got down to the bottom of the list, he would read out: “Sylvernus Fournier:  fifty-two dollars”.

And with the names being in alphabetical order as well as by amounts, a few names later he would read: “Stan McLaughlin:  fifty two dollars”.

While I was only eleven years old, I clearly recall thinking that it wasn’t very nice to list the names off in order of the amount of contributions, because it seemed demeaning to list those who were really not able to contribute as much as others, down at the bottom of the list.  After all, Dad was raising a family of five children on a poor labourer’s wage, and I thought he did pretty good to be able to pay a dollar a week to the church.  And Uncle Stan too!  And besides, Dad always gave us some small change to put in the collection basket too when it was passed toward us.  Of course, that loose change wasn’t included in the family’s contribution that Father read out in his annual list.

I remember the time a couple of years ago that Dad gave me ten pennies to put in the collection basket.  And to make sure I didn’t drop them before the collection basket was passed in front of me, I held the little stack of pennies pressed hard between my thumb and forefinger.  But because I had held them pressed that way for some time, the top one got stuck to my finger and the bottom one got stuck to my thumb.  So as I released the pennies to drop into the long-handled wicker collection basket that Mr. Donohue passed in front of me, all of the pennies fell in except for the ones stuck to my thumb and finger!  Mr. Donohue smiled at me when he saw what had happened, and so did Dad.  So I got to keep those two pennies!

Anyway, I was so pleased to receive that Missal, and be able to better follow Sunday Mass.

Inside the cover of the missal Dad wrote in his best block-style printing:  “To our son Patrick Fournier on his birthday, from Mom & Dad.  March 17/58”.

I still have that missal, and will always treasure it!