While preparing for his upcoming senior prom, eighteen-year-old Pat Fournier has an uncomfortable run-in with the town pharmacist, Cecil Dunne, in this story set in June of 1965. “What’s My Size?!” is the thirty-fifth installment of Pat’s memoir, “Memories of a Boy Growing Up in Blackville”.

I left the table with my supper half eaten when I heard Graham Parks’ car pull into our dirt driveway.

Graham and I had gone all through school together, right from grade one.  I remember that he’d attended my ninth birthday party, and Mom got such a kick out of his good spirits and laughter.  And now we sat in his father’s car and talked about graduating from school, what we planned to do for a job after we graduated, and about the upcoming senior prom. 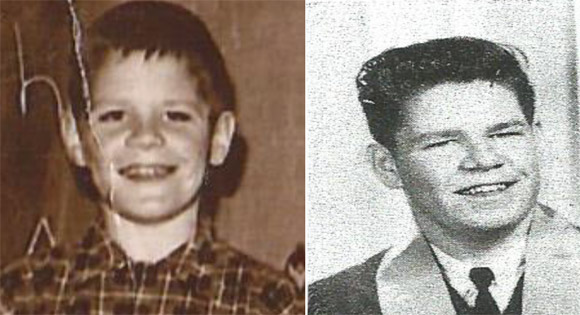 We both had dates for the prom, and were looking forward to the culminating event that would bring our twelve years of school to a close.  The school auditorium would be decorated with balloons and streamers, all the girls would be dressed in fancy gowns, with corsages strapped to their wrists or pinned to their dresses, and the guys would be dressed up in their Sunday suits.  Then after the dance, which was to be chaperoned by some teachers, everyone would end up going for a late night drive somewhere in their parents’ car.

Graham chuckled and said that he was ‘prepared’ for maybe something special happening that night, and he showed me the French safe he had tucked in his wallet – just in case he should ‘get lucky’!  In our own minds we probably knew we were fantasizing, but neither of us would admit it.  We might have gotten a goodnight kiss from a girl for walking her home from a school dance, but I was sure that was about as much ‘experience’ as either of us had.  But we both had dates for the prom, and we figured:  Well, you just never know!

Bolstered by Graham’s thoughts about ‘getting lucky’, I figured I couldn’t take the chance of not ‘being prepared’ too.  So that Saturday I hitchhiked down to Newcastle, with the plan to go to the drug store and buy a package of condoms.

While I could probably buy condoms in a store in Blackville, there was no way I was going to take the chance of buying them in a store where I was known.  And on top of that, I didn’t know anything about buying condoms!  Oh, I somehow knew that there were two popular brand names, Trojans and Sheiks, but that’s about it. 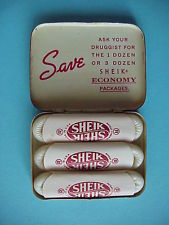 A package of three Sheiks condoms

I remember that I almost choked for laughing when my friend Sterling told me about the time a friend of his went to the drug store to purchase condoms for the first time.  After pacing around the store for a while to get up the courage to go make his purchase, he nervously strode up to the matronly lady behind the front counter and told her that he wanted a package of Sheiks.  Well, she turned around to a display case, then turned and put what she’d retrieved down on the counter in front of him – a package of Shicks.  Shick razor blades!  Not knowing what else to do, he paid for the package of razor blades and left the store.  And he didn’t even shave yet!  Haw!  We had a great laugh over that story!

Well, now I knew what he felt like, as I nervously paced up one aisle and down the next in the little Newcastle Rexall Pharmacy.  I watched as other shoppers came and went, all the while hoping that eventually I’d have the store pretty much to myself to avoid the embarrassment of making my purchase while others were nearby.  I picked up, flipped through, and put back a number of magazines from the news rack by the front window.  I went over to the wobbly wire postcard rack and slowly turned the rack and shuffled through the cards.  I looked around at various medicinal, skin care and toiletry products.

Then I got to thinking that what I should do was, instead of going to the lady clerk at the front counter like Sterling had done, I’d go right to the pharmacist at the back of the store.  And with him being a man, he’d appreciate what I wanted, so I wouldn’t have a hard time with making my purchase.  And I’d already decided to not ask for the condoms by brand name!  I didn’t want a package of razor blades!

Finally, when I saw that there was no one else around, I made my way to the prescriptions counter at the back of the store.  There were a lot of racks of cold pills and advertising pamphlets and stuff on the top of the counter, so I could only see the top of the pharmacist’s head up there on his raised work area, as he worked at filling prescriptions.

I stood at the small waist high opening in the counter where customers dropped off and retrieved their prescriptions, and waited until he saw me.  After a minute, the pharmacist turned to see what I wanted, and — Oh no!  I knew him!  It was Cecil Dunne, Marie McLaughlin’s husband!  Marie was my Aunt Greta’s sister-in-law.  And while we didn’t see much of each other, we did know each other, and while he didn’t say anything, I knew that he recognized me!  So after a quick “Hi”, I asked him for a package of French safes.

Size?  What size?  They come in different sizes?  I didn’t know what size I was!  How do you determine what size you are… down there?!

“Three will be fine” I answered.

Did I see a little bit of a smile as he turned to pick a package of condoms from behind his high counter?  I paid him directly for the condoms so I wouldn’t have to go to the lady at the front cash register, and hurried down the aisle.  The little bell hanging over the doorway chimed and signaled my hurried exit.

Whew!  What an experience!

After that, I figured, I’d better get lucky!

Posted in A Boy Growing Up In Blackville, Blackville, Blog, Memories, Recalling the Past and tagged family history, heritage, local people, memories