It’s the Spring of 1959 and Pat Fournier’s older brother Johnny has an unfortunate run-in with the family outhouse in the sixteenth installment of Pat’s memoir, Memories of a Boy Growing Up in Blackville.

THE OUTHOUSE
Written by Pat Fournier

Our little sister Leslie is born.  Now there are three boys and three girls in the family.  So there’s six of us children now for Dad to raise on a labourer’s pay. 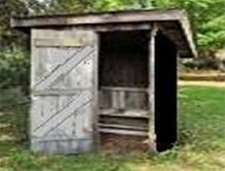 Our tarpaper-covered outdoor toilet stood about twenty feet behind our house, by the rail fence that bordered the woods, and over to the right of our swing tree.

Inside the outhouse, there was a small screened sliding window high on one wall, up by the slanted roof.  An uncoiled fly sticker hung by the window.

But any fly sticker ever hung there never served much use, even though it never took very long for flies to get stuck to it, because there were always more flies buzzing around. 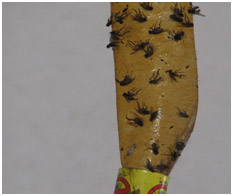 The fly-covered flypaper coil that hung by the small window

A raised board platform was built up from the floor over the deep hole dug in the ground, with two circular knee-high toilet holes cut into the platform near the edge.  But even though there were two holes, two people never went to the outhouse at the same time of course!  I always figured the only reason there were two holes was that when Dad went to the hard work of digging a hole in the ground, he figured it made sense to dig it both deep and wide, so it could be used for a long time with a two-hole outhouse set over it.  If the hole was only dug for a single-hole toilet, then the outhouse would have to be moved to a new freshly-dug hole sooner rather than later, when the hole filled up.  So with the two-holer, you simply had your choice of which hole to use.

The door of the outhouse was built out of vertical boards that were secured together by five other boards that were nailed to them in the shape of two letter “Z”’s sitting one on top of the other.  And because the nails were hammered in from the outside of the door, the sharp ends that protruded through the boards on the inside were hammered down sideways into the wood. 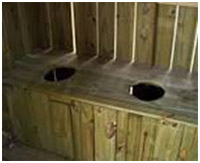 The side-by-side holes inside a typical ‘two-holer’ outhouse

Unless you brought a comic book or a catalogue with you to read as you ‘did number two’, all you could do to pass the time was look up and watch the buzzing flies that tried valiantly to become unstuck from the sticky fly paper coil, or count the bent nails in the door in front of you.  And I noticed that as I did ‘number two’ that one of those nails, near the latch, was not pounded down flat, so it stuck up from the wood at a bit of an angle.

One afternoon Marjorie came running into the house crying “Dad!  Dad!  Johnny’s stuck on the toilet door!”  So we all ran outside, and sure enough, Johnny was secured by his arm to the inside of the toilet door, and was crying in pain!

Apparently as he unlatched the door and rushed outside, he caught the inside of his right forearm on that one nail that wasn’t pounded down flat, and it was embedded in his arm and pinning him against the door!

Since the inside of his forearm was held flat against the door by the nail, it was impossible to see which way the nail was bent, so there was no visible way to determine how to pull his arm off the nail that was holding him captive!  But Dad had earlier noticed that same nail sticking up, so thankfully he knew that the sharp end of the nail was pointed horizontally toward the hinge side of the door, and knew to pull Johnny’s arm back in that direction, and off of the nail.

Mom tended to Johnny’s arm with some iodine and a band aid.  We never did like it when Mom dabbed iodine on an open cut, ‘cause it stung like crazy!  But it supposedly killed any germs that might have got in the wound.

And the door was tended to as well!

Dad took his hammer and made sure that all of the nails in the door were hammered down flat.  And he took to that nail with a vengeance!  He pounded it down so hard it almost disappeared into the wood!

Boy, he made darn sure that that nail wasn’t going to hurt anyone in his family, ever again!