In the eighteenth installment of Pat Fournier’s memoir, Memories of a Boy Growing Up in Blackville, the family receives a visit from Johnny’s godparents, Joan and Alban Boudreau.

We had a nice visit one weekend by Joan and Alban Boudreau, who were very good friends of Mom and Dad when they lived in Bathurst, before Dad moved the family to Blackville in 1950.

Alban and Joan were Johnny’s godparents, and they really thought the world of him when he was a little boy. I remember Mom telling the story that when Johnny was about two or three years old, Joan and Alban got him a rocking horse, but Johnny never played on it, because he was scared of it!

Alban and Joan didn’t have any children, so they really enjoyed staying the weekend with Mom and Dad and us six kids.

Just before they put their stuff in their car as they got ready to leave, Johnny gave Joan a souvenir gift, which was a carving of a little man playing a grand piano. Johnny was always good with making figures out of modeling clay or wood, and he had obviously taken some time a day or two earlier to make it for her, with the plan to give it to her before they left. Joan was delighted with the carving, and couldn’t get over how lifelike it was. And it really did look like the little man that Johnny had carved was playing a tune on the little piano!

After seeing that, I figured I had to make her something too. So I quickly whittled a little piece of wood into a boat, and put a cloth sail on it, and painted the boat green. The paint was still wet when I gave it to her! But while she accepted it and said it was lovely, I knew that it was no way near as nice as the carving that Johnny made for her.

Joan and Alban had a very nice colour camera, and before they left, they took our picture with it, and later sent us a copy. 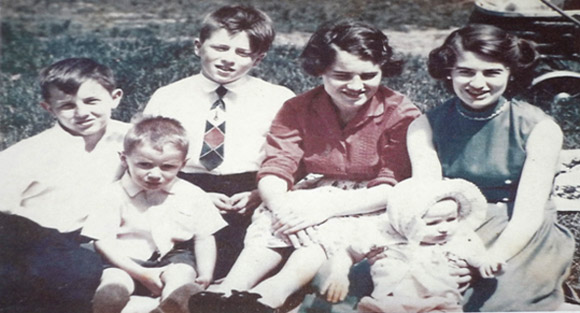