Sixteen-year-old Pat Fournier is growing up. In the thirtieth installment of his memoir, Memories of a Boy Growing Up in Blackville, Pat recalls an uncomfortable situation that occurs in Avila Colford’s grade ten French Class.

The following story contains subject matter and language that some readers may find offensive. Reader discretion is advised.

I was never good at learning French!

Avila Colford, my grade ten French teacher, even criticized me openly right in class one day because I was doing so poorly in her French class:

“You, with a French name, and your father speaking French!” she exclaimed, “You should be ashamed of yourself!”

I didn’t think it was very nice at all of Miss Colford to be bringing my father into it! But I had no response for her, and just sat there crestfallen at my desk, thinking that everyone in my class was being critical of my father now too!

But it wasn’t my father’s fault that I wasn’t any good at French. Sure, Dad was born and raised in Bathurst, and he used to speak French there, but that was a long time ago. He used to say that he ‘lost’ his French after living in Blackville’s small English community for so many years. I didn’t know whether or not it was true that you could ‘lose’ a language you once spoke, but I know he never spoke French to us at home.

I do remember though that sometimes when he was carrying on he would sing a little French hymn that he said the nuns ‘pounded into him’ when he was a little kid in school. It sounded something like: “La voici la nosee dew, la vwa pan de zansha”. He used to say that the words had something to do with angels coming down from heaven. And if someone asked him if he could speak French, he used to joke that he could only swear and fart in French! I always thought that that was hilarious! 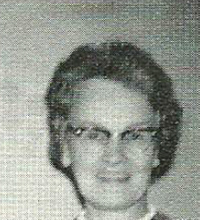 It was an early June summer day as I sat at my desk in my grade ten classroom. We had been in the big new brick school building for a few years now, since it had been built to hold all of the students who were now bused in from the outlying areas. The white two story school house where I first started school was still in use, but only for the little grades. My grade ten class was on the second floor, and my desk was right by the big glass block windows. While Mrs. Sullivan was my home room teacher, Miss Avila Colford came into our classroom each day to teach French. 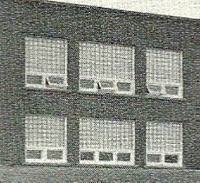 I really wasn’t paying that much attention to Miss Colford, as she instructed the class in proper French pronunciations, and wrote French sentences on the blackboard.  I would rather have been outside on such a nice day!  From my desk right by the windows, about five seats down from the front, I had a good view out to the front of the school through the clear panes of glass beneath the glass block windows.  If the trees in the back yards of the houses across the dirt road bordering the school hadn’t been in the way, I bet I could see the sun glistening off the Bartholomew River, and maybe a boom of logs heading down to the mill.

I was idly watching the dust motes drift through the shafts of sunlight beaming through the windows when it happened! I got the hard-on of all hard-ons!

Just last weekend me and Bobby Coughlan had a good laugh about getting erections! We had both ended up at Frenette’s Restaurant on Sunday afternoon, and after lunching on our orders of Pepsi and vinegar-splattered French fries, we went for a stroll, heading up the road toward Fred’s Irving. And for some reason we got to talking about the erections that we got, which happened at the weirdest of times, and in the strangest of places! And there was nothing we could do about it! It seemed that it was just a part of our bodies maturing as we grew up. And we laughed hilariously as Bob recounted that he had gotten a hard-on when he was picking potatoes out in the garden! Of all places! And with no reason for it! Only a boy going through puberty could relate to that strange physical phenomenon! They just happened, and we had absolutely no control over them.

Well, for some strange and unknown reason, ‘Mr. Testosterone’ was paying me a visit! And it was not comfortable! Because when it happened, my ‘thing’ was aimed down my pant leg, so instead of aiming up, which was normal, my erection was aiming down! Down my pant leg! And there was nothing I could do to ‘adjust’ myself, without it being noticed that I was doing something strange with my hand under my desk. And damn it, it was really hard! And for the way it was positioned, not able to stand up because it was pinned down by my pant leg, it almost hurt!

So I sat there and silently prayed that the hard-on would ‘soften’ and go away by itself. And I prayed that Miss Colford wouldn’t call on me to go up to the blackboard to do a ‘fill-in-the-blank’ in the French sentence she was writing down.

“Patty, go up to the board and fill in the verb in that sentence”, she called.

Maybe – just maybe – if my school desk and chair were not a single connected unit, I might have been able to fidget around and ‘adjust’ myself into an ‘upright’ position before I got up out of my seat! But that was not possible, because the armrest at my left connected the chair to the writing desk.

So I slowly leaned forward, with both hands clutching the sides of my desk, slid my ass sideways to the right, and slowly stood up. Leaning a bit forward! And all the while staring at the blackboard so that it appeared that I was concentrating on what to do with that damned incomplete sentence! But instead I was concentrating on keeping the bulge in the front of my pant leg as inconspicuous as possible!

I slowly made my way up to the blackboard, without turning around or even slightly sideways – which would surely have revealed my ‘situation’!

Standing at the blackboard with my back to my classmates, I picked up the chalk, and took my time filling in the blank for the verb in that incomplete French sentence. All the while I could sense Miss Colford pacing down at the back of the classroom! Then I took the eraser and wiped out the word I had inserted, and replaced it with another one. Then I stood back a bit, contemplating what I had written, hopefully making it obvious to everyone that I was giving that French sentence very serious consideration. But my concentration all the while was really on the one-eyed monster that was throbbing uncomfortably against my pant leg! And I swear the darned thing was threatening to poke a hole in the lightweight material of my summer pants!

Realizing I couldn’t stand there at the blackboard any longer, I placed the chalk and eraser back on the ledge of the blackboard, dusted off my hands, and slowly backed up. Still leaning a bit forward at the waist – because there was no way I could stand up straight! But as I backed up, I bumped into the corner of Miss Colford’s desk! Ouch! So I adjusted my direction, and continued backing up, slowly making my way between the two rows of desks. And all the while as I was slowly walking backward, I continued to frown and stare intently at the French sentence on the blackboard, hopefully making it appear to everyone that the reason I was walking backward was because I was considering the correctness of my answer!

Did Miss Colford or anyone else know what was going on?

Had anyone noticed the bulge down the right leg of my pants?

Did I imagine the silence in the room?

Were everyone’s eyes on me, instead of on the blackboard?

Backward, slowly backward… past Veronica… past Sharon… past Connie… and Irene… and Judy. Damn it! Why were there so many girls in my class? And so many of them sitting in the rows at each side of the aisle where I was backing up to get back to my seat!

Backward – ever backward – until finally, after what seemed like an eternity, I got back to my desk. I gripped the left edge of the desk, and slid my ass sideways, back into my seat.

I didn’t care that my answer was wrong!

I didn’t care that Miss Colford scolded me for putting not one, but two incorrect verbs in that French sentence!

I didn’t care that she had to ask someone else to go up to the board and correct my answer! 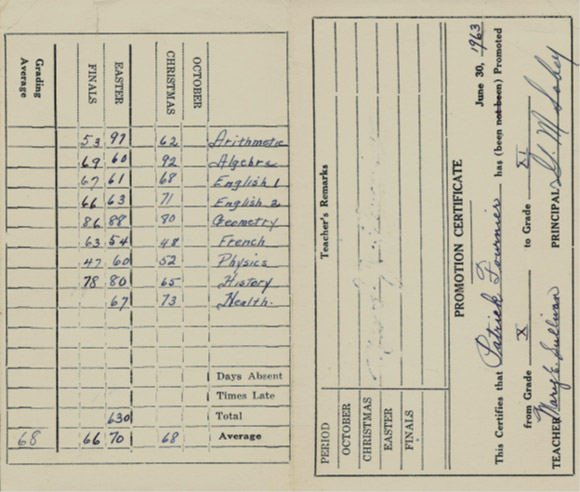 Posted in A Boy Growing Up In Blackville, Blackville, Blog, Memories, Recalling the Past and tagged education, family history, heritage, local people, memories