“Where should we start?” she asks while rocking in her rocking chair, sipping her tea, with both her dogs curled around her feet. “At the beginning, I suppose”, I reply.

And so it begins.

It was the spring of 1922; May 27th to be exact. At a little house near “The Forks”, where the Cains and Miramichi rivers meet at Howard, Ella and William Colford welcomed their second child, a daughter, Noreen Mary.

Noreen would be the second of seven children. Marguerite, born a year earlier, followed by five younger siblings: Patricia, Mary, Doris, Ernest, who was born deaf and mute, and Basil.

Times were tough for the Colford family, but their spirits were always high. They made the best with what they had and their house was always filled with love. The girls all slept in one bed, the boys in another. Their beds, straw mattresses, lay on the wooden floor.

The children often played in the sand, making mud cakes, and playing hopscotch. They’d come home to a supper of bread and molasses and a glass of milk.

Christmastime was always a special time. The tree would be trimmed with red and white yarn and tea lead. The kids would all receive an orange and an apple, and sometimes a bag of candy for their presents.

These were the “good old days”, as she calls them.

A few years later, Noreen started school in a one-room schoolhouse where one teacher taught six grades. During the warmer months, the teacher would take the students outside to play ball, and in the winter, they would go sliding. The school was heated by a woodstove in the center of the room, with oil lamps providing light. The students all had slates and chalk to do their work on.

As a student, Noreen loved reading, although she didn’t care much for the other subjects. On a cool fall day, Noreen and a fellow classmate, Henry Colford, saw the doctor coming with vaccinations, and ran out the schoolhouse door and jumped over the school fence, not stopping until they got home, frightened of getting a needle.

In her teens, Noreen would pole her father’s canoe up the Miramichi River and Cains River and sail down in the evening. She would do this often. Sometimes, she would sail down the river lying down, and people thinking it was empty, would chase down the river trying to stop it.

On November 26, 1940, at the age of eighteen, Noreen married Joseph Keenan and moved to Keenan Siding. Here she gave birth to the first of twelve children, a stillborn girl named Rose Marie. A year later, a healthy baby boy, Billy was born, followed by daughters Theresa, Louise, Mary Ellen, Margaret (Peggy), and Josephine. After another stillborn son, Joseph Thomas, Joseph Jr. was born, followed by Daniel, Ernest and Mark. Life was going well for Noreen, Joseph and their ten children. The children would spend their days swimming in the river, playing in the sand, picking berries with their mother and fishing with their father. By 1969, two of their children had married and moved out. Then, on his way to work, on August 25, Noreen’s husband Joseph passed away. She was left with eight children to raise on her own.

The following years were hard, to say the least. Noreen would stay up all night splitting wood and keeping the fire burning so the kids would be warm, before sending them off to school in the morning. There were times when the house was so cold that the tea in the teapot would be frozen.

The responsibilities she shared with her husband now belonged to her. Splitting wood, milking the cow, churning butter, and carrying water from the spring to drink, clean and scrub clothes in, were just a few of the daily chores she faced on her own. No matter how hard the work, she always pulled through it.

As the years passed on, her children grew older, married and moved out. Her sister Marguerite passed away and her brother Ernie was killed in a tragic accident while riding his bike and in 1994, Noreen was diagnosed with throat cancer. For thirty weeks, she received radiation treatments. Prayer kept her spirits up during the good days and the bad days. After thirty treatments, the cancer was cured.

Now in her mid-eighties, Noreen is as strong and active as ever. Always on the go, you’d be hard-pressed not to find her sitting at the front table at Nine Pine on Thursday nights, listening to the local talent and chatting with friends. Though many things have changed over the years, some things have remained constant; her love of life and her family; her strength to overcome any obstacle thrown her way; and her ever-lasting faith. The glue that holds her family together, I’m proud to call her my Grandmother.

I wrote the story above back in 2009 for a local magazine, Bread ‘n Molasses.  I remember bringing Gram a copy of the magazine when it was published and seeing her eyes light up as she flipped through the pages looking for her life story; a life filled with many ups and downs.  Despite her trials and tribulations, her strong will always pulled her through the tough times. 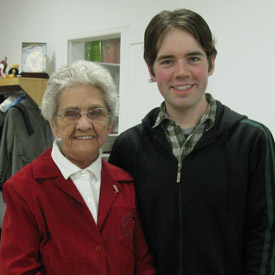 Gram and I at the Keenan Christmas party, December 2009.

My Gram and I had a special bond. Throughout my school years I spent most weekends at her house, switching off with my sister Jennifer who stayed with her during the week.  My Gram didn’t like to stay alone, although she eventually did as we got older.

Around 2010, Gram’s health started to decline.  She didn’t get out as much as she used to, which was hard for her. The Thursday nights she spent at Nine Pine became less frequent.  Every Tuesday you’d find her at Trio Pizza having the fish ‘n chip special… these visits too became rare. Eventually she became dependent on an oxygen tank. Restrictive at first, she accepted this as her new normal. She started going for drives again, and going out if she felt up to it. She was a hard one to keep down.

On March 4, 2012 Gram called me to pick up a fish ‘n chip for her at Trio.  This was a Sunday night – a night I always stayed with her until Judy, her night worker, showed up, but for some reason or other, I wasn’t able to stay. My uncle Junior took my place that night.  When I showed up with her takeout, I remember her trying to slip $10 in my pocket for the food.  Although she always tried, I would never take money from her. 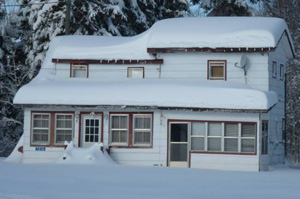 She told me that if I didn’t take it she wouldn’t ask me again, but I refused and told her ‘next time’. I gave her a hug and told her I’d see her tomorrow. Tomorrow never came. Monday morning, March 5, my Gram passed away at home. My heart was broken.  All these years later, it still is. Time may heal all wounds, but the scar remains.

Gram was known as Mama to many.  It didn’t matter if you were family or not or even if you knew her closely.  After her death, people would approach me and tell me stories of ‘Mama’. I had never fully realized how many people she had touched.  She was a special lady.

Driving through Keenan’s just isn’t the same anymore. The house sits empty, the driveway unplowed – a sad reminder that the home that once was filled with so much love and laughter is now just an empty shell of what once was.  All we have left now are the fond memories of Mama.