Pat Fournier was born and raised in Blackville. In a series of short stories, Pat will share his memories of the place, of the people and of his life as a boy growing up in Blackville. In this first installment, Pat sets the scene of his childhood neighbourhood.

An Introduction
Written by Pat Fournier

This memory ‘diary’ is dedicated to our mother and father, Thelma and Sylvernus Fournier.

There are not enough words to express my appreciation and love for them, for their hard work and unwavering devotion to me and my brothers and sisters, to ensure that we grew up in a family of love, with the best care and upbringing they could provide. 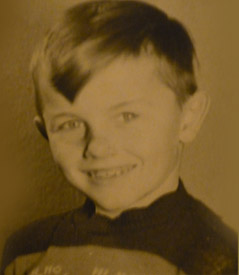 Let me set the scene for the stories I’m about to tell, and show you where I lived:

Blackville is a small village nestled on the banks of the Miramichi River.  The Miramichi is known internationally for its salmon fishing, and a number of the village’s men supplement their regular income by providing guiding services for sport fishermen during the fishing season.

The village was founded by settlers in the late seventeen hundreds, and with New Brunswick being rich in timber resources, grew around the forestry industry.  But while the village grew over the years, it never exceeded a population of one thousand.

The lumber mill, which was one of the major employers of the village when I was growing up, is located at the delta of the Miramichi River and the lesser Bartholomew River, which empties into the Miramichi.  The Bartholomew was the waterway that was used to send logs down to the mill for processing.

The Main Street Bridge, or ‘Mill Bridge’ that crosses the Bartholomew River in front of the mill, divides the little village into the ‘up-roaders’ and ‘down-roaders’ – – that is, the people who live up the road above the mill, and those who live down the road below the mill.  An unspoken friendly rivalry exists between the people of these two sections of Blackville.

The school, a white two story building that houses all of Blackville’s students from grades one through twelve, can be seen just a short distance up the School Lane, across from the mill and the Bartholomew River.

Our family lived ‘up the hill’ on Main Street – – or, as we called it, the Main Road – – about a mile or more up the road from the Mill Bridge.  The hill began its incline a short ways up from the intersection of the Main Road and the Station Road.

Walking up the road, on the right side of the road and at the crest of the hill, was Everett and Maggie Price’s little house.  I never knew anything about them except that they both seemed to be seniors, but I vividly recall that Everett could usually be seen sitting on a chair on his front deck drinking ginger ale.  It was said that he drank so much ginger ale that it rotted most of the teeth in his mouth.

Still on the right side of the road, up from their place, were two or three vacant lots.  One lot had a pit dug into it, which may have been intended to become the cellar of a house.  However, a house never materialized on the property, and the pit filled with water, which provided a skating rink for us in the winter.  Next to that lot, separated by a stand of trees, was another vacant lot, which we used as a baseball field, with wooden bases tamped down in the grass, in advance of the small trees that grew in back of the field.

Next to that vacant field was the Walls house.  I recall that Freeman Walls worked for the railroad, and at Christmas time he always had extra pieces added to his model railroad, which I’m guessing he let his children play with.  They had two sons, Phonse, and Terrance, who we sometimes called ‘Teddy’.  I think they had a daughter too, who was older than Terrance, but I don’t remember her or her name at all.

The Walls’ next door neighbours were the family of Barry and Marie MacKenzie and their two sons, Robert and Ronald.  They lived with Marie’s elderly mother.

And next door to them lived our relatives, Stan and Greta McLaughlin and their children.  Greta was our aunt, since she was our mother’s sister.  Their large family consisted of five boys and three girls:  Pat, Gary, Ronnie, Michael, and Jimmy, and Aldean, Colleen, and Nancy.

Next door to them was a field which was bordered by an electric fence which kept the two or three cows in the field from escaping.  The cows belonged to John and Lil Hennessey, who lived in their big two story house, with their children, and Lil’s uncle, Fenton Brophy.  Their children were Rosemary, Barbara Ann, Michael, and Winnie May.

Right in front of the Hennessey house an unpaved dirt road, the Bartholomew Road, intersected the main road at an angle.  So the next house to them, the last house on the right side of the road, actually faced the Bartholomew Road instead of the Main Road.  The house belonged to ‘old Mr. and Mrs. McLaughlin’, who were rarely seen, and seemed not to be friendly to anybody.  The McLaughlins were Stan’s parents.  Besides Stan, they had two other children who were at least in their late teens, if not their twenties when I knew them:  Marie and Billy.  Billy used to play the guitar, and I remember he had a boxing bag hung up in the big barn behind their two story house.

Back again at the crest of the hill, this time on the left side of the road as you walked up the hill, and directly across from the Price’s place, was Hugh and Edna McLaughlin’s house.   They had three children:  Faye, Peggy, and Huey.

Next door to them were the Dolans – – I can’t remember their first names, if I ever did know them – – who lived alone, without any children.  Just beyond the Dolan’s potato field was Hubert and Yvonne Underhill’s home.  Hubert and Yvonne were friendly to our family, and their children were also good friends of ours:  Alton, Eric, and Debby.  Directly across from their house was the vacant lot that served as our baseball field.

Next door to the Underhill’s place was Mike Murray’s place, with an empty field beside his house, where his chickens used to run free.  The family seemed to be reclusive, and I have no memory at all of Mrs. Murray.  I recall that the Murray’s had a daughter, who was in the higher grades when I first went to school.

Next to their field was a small house that was set back near the woods instead of near to the road, where the Vickers family lived.  I can only recall that their son’s name was Vinnie, and nothing more, because they moved away early in my childhood.  The family that later moved into their house was a couple that had two little girls.  The family was Pentecostals, and they were rarely if ever friendly to anybody in the neighbourhood.

Next door to them was Jim MacKenzie’s place.  I remember that our mother used to go over and help take care of Jim’s wife, because she was sick and bedridden.  After Mrs. MacKenzie died, Jim became a bootlegger – – either to make some money, or for the company – – I’m not sure which.

And next to Jim’s place was our house, which was the last house on that side of the road.  Originally, there were four of us children who were fairly close in age:  Katharine, Marjorie and Johnny and I, until nine years after I was born, my brother Leonard, and then my sister Leslie came along. 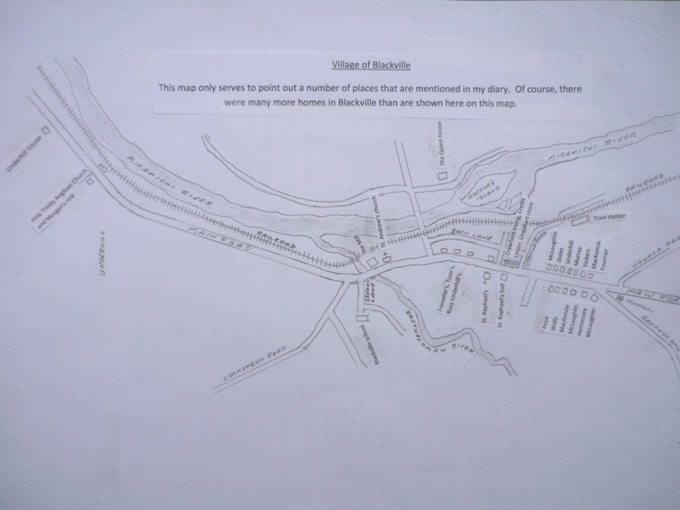