The next installment of “Memories of A Boy Growing Up in Blackville” features Pat Fournier recalling his earliest memories from his childhood, between the ages of three and five years old.

Winter of 1950/51 – three years old
We were living in some rented rooms in the big two story MacCormack house, which was close to the Bartholomew River and the mill bridge.  The ice was thick on the frozen river, and many people from around the area came to skate and slide on the ice.  One of my first memories is of my father taking me out on the icy river, and hauling me around on a sled. 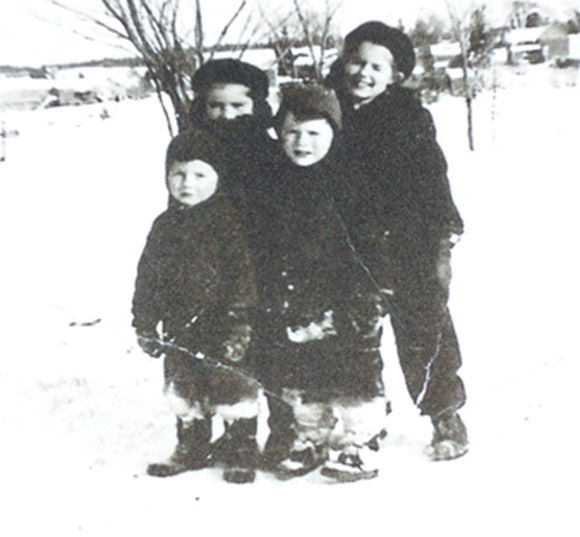 I believe the above picture of the four of us was taken somewhere by the MacCormack house. Marjorie and Katharine are standing behind me and Johnny. Smiles all around!

Summer of 1952 – five years old
Strange how memories of funny little things or events come back to you!

I know that I was at Aunt Linda’s house (down the road past the bridge) and my mother was there too.  But I don’t know if we were just visiting, or living there for a while.  Anyway, there was a colourful mask of a cartoon bear on the back of the corn flakes box, and Mom cut the picture out along the dotted lines, and put a string through the holes that she punched into each side of the mask.  I put the cardboard mask on my face and went down to the end of the sloping dirt and grass driveway that led up to the house, and crouched down behind the cranberry bushes.  When I saw my brother Johnny walking down the road on his way home from grade one with a couple of his friends, I jumped up and yelled “Boo!”  And Johnny’s friends laughed at me, because I had a mask on and it wasn’t even Hallowe’en.  Funny little memory!

Fall of 1952 – five years old
We are now living in our own two-story house.  It’s the last house on one side of the road up ‘the hill’.  There are two rooms downstairs: a kitchen on one side of the house, and a living room on the other.  Both the front and back doors enter into the kitchen area.  There is no indoor plumbing, so we have to get our water from a pump out by the side of the house, and go to the bathroom in the outhouse in the back yard – – or use a chamber pot at night!  The kitchen wood stove is at the front of the kitchen, and it has four lids that can be lifted with a small poker to allow a cooking pot to be set directly over the flames, and there is also a large water reservoir at one side, where the water is warmed by the heat from the stove.  The kitchen table is surrounded by high-backed kitchen chairs that are painted a pale green.  With no inside plumbing, Mom has to wash the dishes in a plastic tub set on the counter, where she also rolls her bread dough, and prepares our meals.

There is a dark green curtain hanging in the doorway that separates the kitchen from the living room.  In the living room, there is a small wooden stove to help heat that side of the house, and there is a square hole cut in the ceiling so that the heat can rise and help heat the upstairs bedroom area.  There is also a big heavy green couch, with fancy white doilies on its back and arms, and a big wide-backed rocking chair that used to belong to Dad’s father.

There is a small right-angled stairway in the back corner of the kitchen that leads upstairs.  And upstairs there are also only two rooms:  at the top of the stairs, the bedroom for me and Johnny and Katharine and Marjorie, and the other bedroom – – with a curtain in the doorway – – for our mother and father.  Mom hung a big sheet on a heavy cord between the boys’ and girls’ sides of our bedroom, for privacy between the boys’ side and girls’ side.  There are empty orange crates stacked end to end in two corners of our bedroom, where we keep our toys.  At the foot of Mom and Dad’s bed is the hole in the floor that lets the heat in from the living room stove below.  There is a square board under the bed that can be taken and inserted into the hole when the stove isn’t on, to prevent someone falling in the hole.

Outside, near the outhouse, is our ‘swing tree’.  A large plank is spiked about ten feet up in the tree, and each end of the plank is nailed to poles buried in the ground.  With rope swings hung from the plank on each side of the tree, two of us can swing at the same time.   And there is a nice garden that our mother planted on the side of the house, where she grows all kinds of vegetables in the summertime. 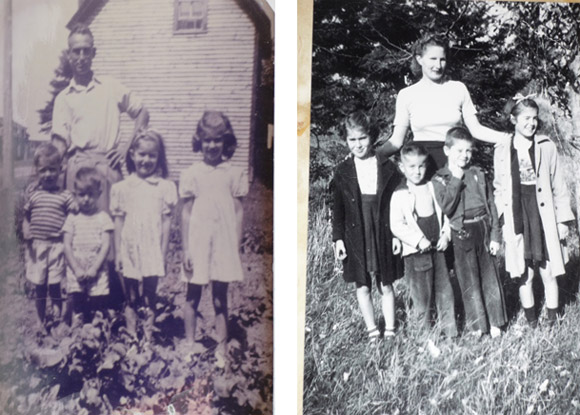 Separate pictures of Dad and Mom with the four of us.  Dad with Johnny, me, Marjorie and Katharine, in front of our house.  This picture would have been taken in 1951, when I was 4 years old, Johnny 5, Marjorie 7, and Katharine 9.  Note how close the upstairs window in Mom and Dad’s bedroom is to the roof of the house.  The sloped roof was right overhead all of our beds in the upstairs bedrooms.   Also, you can see one of the two window gables in the front of the house.  Looks like we were standing in front of Mom’s garden patch.  That’s Mrs. Walls’ house that can be seen in the background.

The picture with Mom looks to have been taken maybe a year later.  Marjorie, me, Johnny and Katharine all appear to be bigger than in the picture with Dad.  It was possibly the following spring or fall, judging by the coats we were wearing.