It’s the 40 days of Lent and twelve year old Pat has given up candy for the lenten season. Earning money from his neighbour Jim MacKenzie, Pat engineers a plan to buy and save until Easter, as much candy as he can at Jenny Hayes’ store. 40 Days of Stupidity is the nineteenth installment of Pat Fournier’s memoir “Memories of a Boy Growing Up in Blackville”.

It’s March 2, Ash Wednesday, and the beginning of the season of lent.

After breakfast, Katharine, Marjorie and Johnny and I gathered up our school books and walked down the hill to St. Raphael’s church to go to mass before we continued on our way to school. Ash Wednesday was the day that started the forty days of lent, and we had to go to mass to get the ashes on our forehead.

As Father Nowlan prepared to give communion, the choir up in the balcony over the back doors of the church, led by Monica Donahue at the organ, sang the Latin ‘Agnus Dei’:

After communion, Father blessed a silver bowl full of ashes that had been made from burned palm tree fronds, and stood with an altar boy at the step in the center opening in the altar railing. Then everyone left their pews and lined up in the aisles to proceed to the altar to have Father make the sign of the cross on their forehead with the ashes. As he did, he said: “Remember that thou art dust, and unto dust thou shalt return”. I remember thinking he must get awful tired saying the same thing over and over and over again!

And while it was supposed to be a cross shape that Father made with his thumb on everyone’s forehead, it usually ended up just looking like a dirty smudge! And the funny thing was, we weren’t supposed to wipe or wash the ashes off! So when church was over we continued walking on to school, with black smudges in the middle of our foreheads! But the non-Catholic students in school had gotten used to seeing us – and the Catholic teachers, too – with an ash smudge on our foreheads on Ash Wednesday each year. And most of us would end up wiping the ashy grit off by recess anyway! 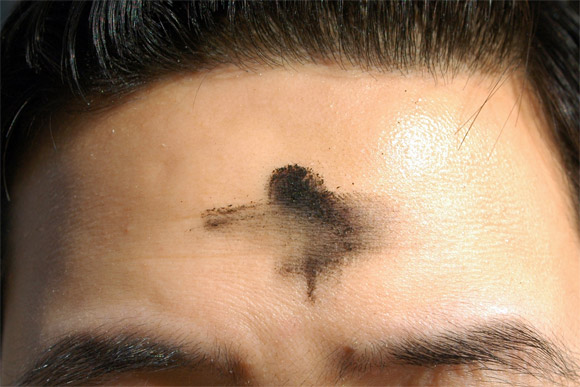 A smudged Ash Wednesday cross on the forehead

And it was a rule that Catholics were supposed to give up something for lent.  Something that they really liked and would miss having or doing, so it would be a sacrifice to endure until Easter Sunday.  And our Catholic friends always asked:  “What are you giving up for lent?”  So we had to have something in mind, to be able to reply with:  “I’m giving up dessert”, or whatever.

Well, what I decided to give up was candy.  And I had this really great idea!

Our next door neighbour Jim MacKenzie was always asking me to go to the store for him, and every time I went down to Jenny Hayes’ store to get him his groceries and Goldenrod chewing tobacco, he would pay me with dimes or nickels.  And sometimes I’d be lucky and he’d give me a whole quarter!  Well, I decided that for the next forty days I wouldn’t eat any candy, but every time I went to the store for him and he paid me with change, I would buy some candy – but not eat it!  That way, at the end of lent, I’d have a treasure trove of candy to enjoy!  But I didn’t tell anyone what my plan was, and I knew I had to find someplace to hide my candy away so no one would find it.

That evening, after the supper dishes were done, Mom called us all into the living room, and got us all to kneel by the couch and chairs to say the rosary.  She knelt down too, and led us in the rosary as she fingered each of her rosary beads, and started off each prayer.  She would say the first half of the Hail Mary, and then we would have to say the Holy Mary part.  Then when she got to the Our Father, she would say the first half of the prayer, then stop, and we’d have to finish it.  And in between the decades of the rosary, she would say something about one of the Sorrowful Mysteries.

Of course, to ease the monotony, Johnny and I would look over at each other and make funny faces to see if we could get each other laughing!  So then Mom would get mad at us, and make us move and kneel further apart from each other.  But we’d still snicker to ourselves as we looked back at each other!

And sometimes Dad would get up half way through the rosary, and leave to go out to the shed to chop wood or something.  Johnny and I both wished we could do that too, but there was no way we could get off our knees until the rosary was finished!

But while saying the rosary every night wasn’t something I looked forward to, I did look forward to going to the store for Jim almost every day, to earn the nickels and dimes to buy my candy.  Once I bought the groceries that Jim sent me to get, I’d look at the candy display on the shelf behind the store counter, and say:  “I want two cents worth of those, and five cents of those ones, and two of those big gumballs, and five cents worth of those….” and so on, and Jenny Hayes’d put each selection in a little brown paper bag.

I always liked Jenny.  I remember her as being a bit ‘portly’, and a friendly and honest storekeeper.  I recall that a few years ago when I was smaller, Mom sent me to the store to get some meat for supper, and I asked for a half pound of ham instead of the less expensive hamburger.  But Jenny was kind enough to recognize that I had surely misunderstood Mom’s request.  I always thought that that was very thoughtful of her to not take advantage of my mistake and make a bigger sale selling me the more expensive meat, knowing that we weren’t a well-off family.  And we didn’t have to pay for our groceries right away either, because she kept a list of what we bought, and Dad would go in and pay what he could on our grocery account when he got his pay cheque.

So there were a number of times that Jenny, standing behind the counter in her store, would peer down over her glasses at me with a strange look when I bought candy every time I went to the store for Jim.  ‘Cause she and her family was Catholic too, and she must have found it peculiar that I was buying candy all the time during lent, when it was probably something I should be giving up!

When I got home, I’d empty the little bag into a small box that was tucked away under some books on a shelf in my room.  I’d try not to look as I emptied the bag into the box, because I wanted my treasure of candy to be a surprise even for me when I opened it up at Easter!  But I knew I had Popeye candy cigarettes, black licorice pipes, coloured gum balls, orange coconut-filled candies, light and dark caramels, jelly beans, gumdrops… so many candies that I liked!  I couldn’t wait until I got to feast on my hoard of candy on Easter Sunday!

On Thursday, March 17, I turned thirteen.  And after supper, Jim knocked on our back screen door and called out for me to go to the store for him again.  So, another walk down the hill to Jenny’s store.  More change.  More candy!

And it wasn’t a difficult trek to the store either to earn Jim’s change to buy my candy.  Sometimes I’d take our bike, because it had a wire parcel carrier, and pedal down the hill as far as the corner at Fred’s Irving, then down the Station Road to Jenny’s store.  But most of the time I’d walk.  And there was a shortcut to take to the store if you walked.

There was a big low-sloping grassy field right next to Hugh and Edna McLaughlin’s yard, with a well-beaten path that started just past their fence.  The path went all the way from the end of their fence down to the Station Road.  Half way down the hilly path, you could see Monica Donahue’s little house on the left.  There was nothing but deep woods way over on the right of the path.  But the great thing was that the path ended just to the left of Harry Underhill’s store, and Jenny’s store was just to the right of his store, on the other side of a dirt driveway.  So it was an easy walk down to the store and back, and an easy way to earn my candy money. 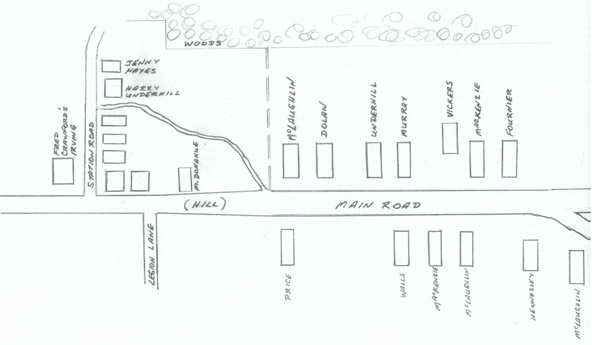 Finally, forty days after Ash Wednesday, it was Easter Sunday.  Of course, we all got dressed up in our best clothes for Mass.  Then afterwards, Mom had a fancy ham dinner with all the trimmings, and her delicious butterscotch pie with the meringue on top!  I remember that Dad usually gave Mom a present of a nice lily flower for Easter, and they’d give each other a kiss and say “Happy Easter”.

Later that afternoon, I went into my room and secretly took the box down from the shelf, and opened it up to reveal my secret treasure trove of candy!

But the funny thing was, after all this time, after so much anticipation and looking forward to enjoying my special treat, the candy didn’t taste as good as I thought it would!  And I should have figured that some of the candy would get stuck together in the warmth of the closed box.  And some of the sugary coating even melted off some of the candy, and stuck to the cardboard!

Then I realized with disappointment just how stupid I was to have bought all that candy!  Instead, I should have saved all the money that Jim gave me all during lent, and then used it to buy myself something really special.

So I ended up eating the candy bit by bit over the following days, but I never told anyone about what I had done.  Because I was embarrassed at being so stupid!

Boy, was I ever stupid!