In this ninth installment of Pat Fournier’s memoir, “Memories of a Boy Growing Up in Blackville”, eight year old Pat struggles with the concept of death after a young boy, Allie Davidson, drowns in the summer of 1955.

THE BOY IN THE CASKET
Written by Pat Fournier

This is a sad memory from my childhood.

A boy from our school drowned while swimming in the Miramichi River.  If memory serves, I think his name was Allie Davidson, and he was in a higher grade than me at school.

I remember sitting in class a day after that happened, when one of my friends in grade two raised his hand and asked the teacher if it was all right if, when he left school that afternoon, he could go directly to the ‘white house’ instead of going right home.  I knew that he meant that he wanted to go to the house where the drowned boy had lived, but I wondered:  why was he calling their home the ‘white house’?

Was the Davidson house painted white?  It was only later on that I learned that he actually said the ‘wake’ house, and that was the name given to the house where a dead body was lying in a casket.  When the teacher asked if any more of us wanted to go, I raised my hand too, just as a lot of others did.  So the teacher made a list of the names of the kids who were going to the wake house instead of directly home, in case their parents worried about where they were and why they were late getting home.  But while I raised my hand too, I decided instead to go straight home right after school was out.

After supper, Dad said he was going to go down to the wake house, so I asked him if I could go with him.  I remember Dad got all dressed up in his suit and tie, and put his dress-up fedora hat on, the one with the two little red and green feathers sticking up from flat bow of the wide band above the brim, on the left side of the hat.

Dad helped me get ready by having me stand on a kitchen chair, so he could snap the shoeshine rag over the toes of my shoes and give them a nice shine.  And I put on my good white Sunday shirt, and my plaid Sunday tie.  While Dad had to tie his tie on, my tie had a wide elastic attached to each side of the already-knotted bow, so I just had to put the elastic around my neck and tuck it under my shirt collar. 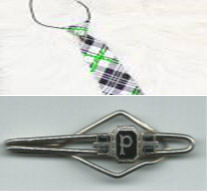 Then I used the fancy tie clip that Dad got me, that had my initial “P” on a black stone, and clipped the tie into my buttoned shirt.

I remember as we walked down the road how proud I was that I was going somewhere with Dad all by myself!  And when he asked me if he was walking too fast for me, I said “No”.  He really was, but I didn’t say so, and I kept walking fast to keep pace with his long strides.

But this is the strangest thing I remember about that day:  The Davidson house was way down toward the end of the Station Road, and across the tracks from the train station, so we had to turn right at the corner of the Main Road and the Station Road.  And right at that corner was Fred Crawford’s Irving garage – – and there were coloured plastic pennant flags strung from the roof of the garage to the gas pumps, and even strung across both roads and attached to the telephone poles!

And I clearly remember thinking:  “Why are they flying flags?  Why are they celebrating that the Davidson boy drowned by flying flags?”  In my young mind I didn’t understand that the pennant flags had nothing at all to do with the boy’s death, but were just an attention getter to get people to go to the garage to buy gas!

When we got to the Davidson house, there were lots of people already there.  I remember that all the other visitors were dressed up too, and they were talking low, and shaking their heads, and looking sad.  There was a shiny wooden casket with metal silver handles along the side, over against one wall on a high pedestal.  Dad lifted me up so I could see in.  The Davidson boy was just laying there, all pale and still in the shiny white satin cushions and padding.

Dad walked around and talked to some of the people there that he knew, and to the Davidson boy’s parents, and he shook their hands.  Then he walked over to a pedestal by the door, and signed his name in a book.  I stood on a small stool so I could reach the book, and I ‘signed’ my name too.  I printed “P-A-T-T-Y” in neat block letters.  After a minute, Dad said “Let’s go”.  We hardly spoke on the way back home, back up the Station Road and back up the hill to our house.

At eight years old, I was taking in a lot of things and working things out in my mind, and even at that young age, I vividly remember thinking to myself:  Why did that little boy – – bigger than me, but still a little boy – – go and drown?  Because he shouldn’t have!  Because I know where he drowned!

This is a picture of Doctor’s Island as viewed from the bridge, taken years later, with the trees grown up and after the beaches had perhaps eroded away. Doctor’s Island can be seen upstream in the middle of the river. The photo has been edited to roughly illustrate where the sandy beaches were on both sides of the river, with the old concrete abutment in the middle. It was safe to swim at the beach on the left. It was not safe to swim at the beach on the right.

Way down the Main Road, and just past Frenette’s Restaurant, there’s a road that connects to the Main Road that goes down a steep hill and across a bridge that spans the Miramichi River.  If you stand on that bridge and look up the river a little bit, you’ll see Doctor’s Island, where there’s a fishing lodge back in the trees.  Down below that island, about half way between it and the bridge, there is a big concrete abutment sticking out of the middle of the river that used to support a bridge that collapsed years ago.  On the left side of that abutment is a sandy beach, where it’s safe to swim.  On the other side of the river, there’s another sandy beach, but just before that you can see that the river comes around a bend and swirls in a deep whirlpool just before that beach, so the water there is very deep and fast, with an undertow that can pull you down.

And everyone knew that that was not a safe place to swim.  And all the parents told all of their children not to swim there.  So I’m sure the Davidson boy knew that he shouldn’t go swimming there either – but that’s where he went swimming, and got caught in the undertow, and drowned!

So I had a hard time understanding why someone bigger than me, in a higher grade at school, would not listen to his parents, and go where he knew he wasn’t supposed to go, and then drowned!

I thought a lot about that.

The Blackville train station. The Davidson house was across the tracks.

If you have any comments or questions about Pat’s stories, you can contact him at his email address at pfournier@eastlink.ca.

Posted in A Boy Growing Up In Blackville, Blackville, Blog, Recalling the Past and tagged heritage, local people, memories, youth