Gary Silliker is proud of his Miramichi roots. He has always had a keen interest in the men and women who were swept up into the events of the world’s first global conflict – The Great War for Civilization. He had a lengthy military career, proudly serving with the Canadian Military Engineers. While attached to the UN Mine Action Center in Bosnia, in 1997, he daily walked by the Sarajevo street corner where an assassination in 1914 became the catalyst that brought on the horrors of the Great War. 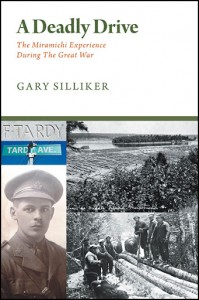 The significance of that street corner was not lost on him. In 2005 he took leave from his position with the UN Mine Action Center in Afghanistan to tour the battlefields of France and Belgium and seek out the graves of the Miramichi war dead. That journey prompted him to research and write A Deadly Drive: The Miramichi Experience during the Great War.

A Deadly Drive explores the wartime experiences of the communities in the Miramichi region, from Neguac to Richibucto to Boiestown, during the Great War. The experiences of sailors, soldiers and nurses serving overseas, as well as the men and women who remained in Canada, are explained in a chronological format. Individuals’ participation in major battles in France, Belgium and Turkey are examined, as well as the impact on the home front due to rationing, prohibition, conscription, morale, economy, and politics. The devastating effects of the Spanish Influenza pandemic, that may have taken more lives than were lost on the battlefields, is not forgotten. A Deadly Drive tells the story of many individuals swept up in the work of war. All the known Miramichi “war dead” of the Great War are accorded detailed obituaries throughout the book. Details are also provided about individuals, men and women, who were decorated for duty, bravery and/or distinguished conduct in the face of the enemy. The story of Moritz Lifsches is one of tragic family upheaval due to war, while the story of Neil Morrison Jordan is one of courage in the face of the enemy.

Gary and his wife, the former Corinne Dalton of Newcastle, currently reside at “Sappers Rest” in Mahone Bay, NS, and have two children and four grandchildren. His book can be purchased online by Friesen Press.