This story was originally printed in Bread n Molasses magazine and gives the history of an old general store in Barnettville (the former Darlene’s Tea House). 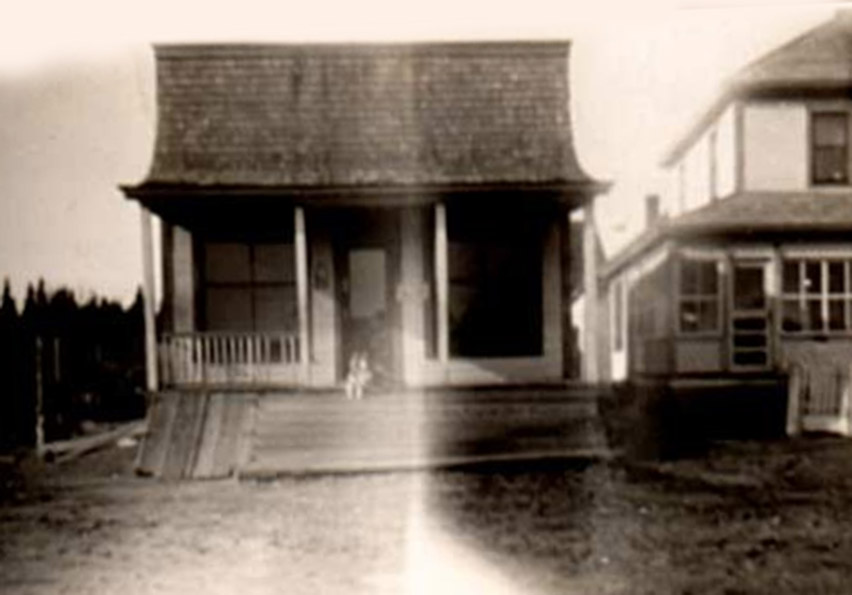 Memories of the Old Store

In the early years when Mr. & Mrs. (British Nathaniel) Underhill were running the store, they would order a puncheon of molasses, a barrel of vinegar, one of salt pork, one of corned beef and salt herring. There would be kendals of cod fish, wooden boxes of smoked digbies (digby cod), raisins and dates as well as dried apples and prunes. They also ordered 50 lb. Bags of coarse salt, 100 lb. Bags of white sugar and brown sugar, bags of oatmeal, corn meal, beans and oats (for horses).

All of these items would be sent up from Newcastle on the freight train, which made a trip to Fredericton every second day. There was a train siding close by their house and store, which made it very convenient for their supplies to be delivered.

They had practically everything in their store. Mrs. B.N. had a glass showcase with needles, thread, yarn, etc. She also carried yards of pretty cotton print for making aprons. In the showcase also were straight pins, hairpins and hairnets. She said no woman had the right to cook or make butter without having a hair net over her hair. She had all the items necessary for daily living in those days including yeast cakes, oil lamps, toilet soap and talcum powder.

Each family could get their supplies and pay for them at the end of the month. She kept a record of each item in a big “Bear” scribbler and it was always 100% correct. Included among their supplies were scribblers, pencils and slates as the school was close by. An exciting thing for the children were big red suckers that sold for 1¢ each, also chewing gum which was often referred to as “boughten gum” (as opposed to spruce gum from the trees). All the various varieties of tobacco were available also as well as nails and rabbit wire at 5¢ a roll.

45-gallon drums of kerosene for oil lamps were sent down from Swims in Doaktown on the freight train’s return trip to Newcastle from Fredericton. Later on in years they carried soft drinks, root beer, ginger ale and lime rickey which sold for 5¢ a bottle.

They owned a lovely Guernsey cow named Bess that would come to the fence near the house each time to be milked. Mrs. B.N. milked her and made marvellous butter. She was a nice salesperson, a terrific worker and a great neighbour.

Mr. and Mrs. B.N. owned a Plymouth car for years but it always looked the same because of their loving care of it. The little store was a wonderful place to gather in the evenings to swap yarns and gather the current news. There were more logs hauled and more horses traded there than any place in the county. This all occurred in the building which is now Darlene’s Tea House.

Update: The Old Store in the story above has gone through several transitions through the years. It was purchased by Darlene Jardine and moved down the Barnettville Road where it became Darlene’s Tea House. Darlene built a section onto it to add more dining space for the Tea House. Now that the Tea House is closed, that section has been turned into bedrooms and the building has once again been reborn – this time as Darlene’s Vintage Cottage.

For more information about the cottage, visit www.darlenesvintagecottage.com.