The award was presented by Marcelle Mersereau, minister responsible for sport, recreation and active living for New Brunswick, during a ceremony Sunday in Fredericton.

“The outstanding performance given by Carolyne and Bonard was one of the main factors in New Brunswick receiving its highest ever medal count in figure skating at a Canada Winter Games competition,” Mersereau said. “Their silver medal is a preview of a sparkling skating career for these young athletes who have the talent to test their abilities at a very high competitive level.” 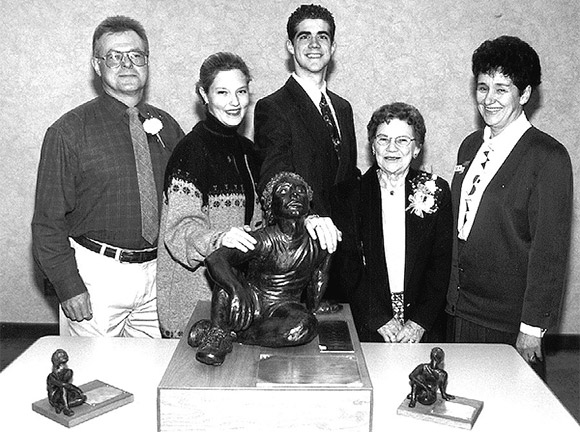 Bonard Muck of Blackville was making his second appearance at a Canada Winter Games competition. He also competed in the men’s pre-novice competition at the 1995 Games in Grande-Prairie, Alta. His partner at the 1999 Canada Games in Corner Brook, Carolyne Forest, is a resident of Châteauguay, in suburban Montreal.

Muck and Forest became partners in June 1997 and began training in Moncton. They moved their training venue the following year outside Montréal where they undertook intensive training with coaches Josée Picard and Éric Gillies at the prestigious Centre d’entraînement Élite de Boucherville.

Also in 1998, the duo won the New Brunswick provincial championships in their division and earned a third-place standing at the national championships. Coupled with their silver medal performance in Corner Brook, the pair finished the 1998-99 season in fine style. This summer, they will move to the junior pairs dance category.

Muck graduated from Blackville High School in 1998 with honours. Both skaters are continuing their education in Quebec while maintaining a rigorous training schedule.

The Roly McLenahan Canada Games Award was introduced in 1985 to recognize a Canada Games athlete who best combines excellence in sport, perseverance and sportsmanship, and who has made a significant contribution to the New Brunswick team effort at the Canada Games.

The award is dedicated to the memory of Roly McLenahan, the first director of sport for New Brunswick and a founding member of the Canada Games Council. His wife Ardith McLenahan attended this year’s award ceremony.

New Brunswick captured 14 medals during the two-week competition at the 1999 Canada Winter Games. Special certificates were also awarded to medal winners during the ceremonies.