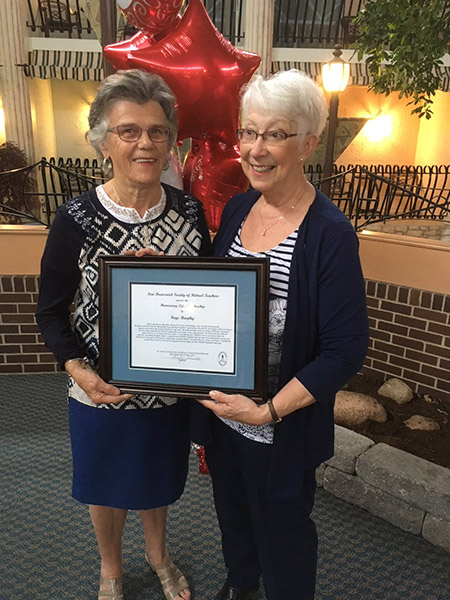 In late Spring, the New Brunswick Society of Retired Teachers Honorary Lifetime Membership was awarded to Faye Brophy of Blackville.

Faye Brophy retired in 1989 after 35 years of teaching. She had obtained both her BA (1967) and B. Ed (1971) from the University of New Brunswick. She taught in Doaktown and Devon before finishing her career in Miramichi at Harkins and Miramichi Valley High Schools. Faye not only superbly represented her profession, but she also generously served its members.

Faye was very active in her local branch of the NBTA as secretary and the editor for a Guidance and Counselling newsletter. She also served on a number of branch committees. Additionally, she represented Branch 8 on the Provincial Board of Directors.

Upon retiring, she became immediately involved with the Miramichi Area Retired Teachers’ Association (MARTA). She began by helping to organize and sell at the annual MARTA Craft Sale. She then became President of MARTA for two years, followed by another two year term as Past President.

Eventually Faye also became involved with the NBSRT executive by serving as its secretary for five years. It was during her term as secretary that, together with Pat McCluskey, she helped create a computerized NBSRT membership list that was ultimately used by the Pension Branch as the basis for deducting monthly NBSRT membership fees.

Faye lives in Blackville where she continues to assist her husband, Merle, with his trucking business. Much of her time is also spent with her two sons and their families – especially her three grandchildren. During the summer she spends many weekends with her family at their camp in Grand Lake. Most winters she can be found in Florida from late March to late April. She also spends a great deal of time volunteering her time to do work on behalf of her church. She continues to faithfully attend both the MARTA Fall and Spring General Meetings and the NBSRT Biennial Meetings.