Arthur Dunphy has been flying for more than 67 years and seen a good deal of the world during his travels.

Dunphy, who is 94 years old, enlisted in the Royal Canadian Air Force in 1940 during the Second World War. 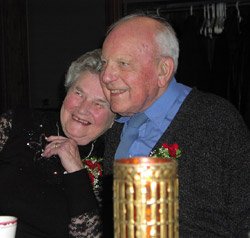 Arthur Dunphy with his wife Dorothy

“That was my ambition to be a pilot,” he said.

While he failed an initial medical that would have allowed him to start training for his wings, he worked on the ground crew until he passed the test a year later.

After some initial training in Canada, the Blackville native travelled to England and Scotland, where he went through months of pilot training and became a part of the Royal Air Force.

After being posted in northern Africa for a short time in 1942 and going on a few bombing missions in Germany, his crew moved on to southern Italy in 1943, where Dunphy stayed until he returned to Canada in June 1944.

While he was a trained bomber pilot, he had a very different role in the war for the most part.

“The work that we did was delivery of personnel and supplies to the underground movement,” he said, noting he flew a Halifax Bomber in those days.

The movement, which had a presence in countries across Europe, was working undercover to upset enemy forces.

“The underground movement was active, you know, doing sabotage work,” he said.

Dunphy and his crew of six would fly out after dark to find bonfires the underground movement had lit to make their presence known. The fires would spell a certain letter, depending on specific instructions set out before the mission.

His crew would then send Morse code signals back and forth with those on the ground to confirm each others’ identity.

Dunphy’s crew would drop supplies and troops out of the plane, although some people were nervous about being dropped 500 feet with a parachute.

“If they didn’t want to go, the dispatcher would push them,” he said.

During his tours, Dunphy took part in 85 of these missions, travelling to Albania, Poland, Czechoslovakia, Yugoslavia, Hungary, Austria and northern Italy.

Dunphy said each time they prepared for a trip they would take part in a briefing, have supper and rest for an hour before going to the plane.

“The most anxious time was between supper and the time you went to the craft, ” he said, noting it gave the crew too much time to sit and think about the dangers they may face on the journey.

Trips averaged about six hours, but could last as long as 10 hours, depending on where they were going.

“Naturally you’re tired by the time you get home,” he said, noting there was always a sense of relief when they would drop the load and start the flight back to base.

Dunphy and his crew had some close calls, he said.

One time, a night fighter plane started following on their tail, and it was only because it was so dark that particular evening that they managed to lose the plane, he said.

Another evening, they flew over an island they thought was occupied by British troops.

“They opened fire anyway and hit us,” he said, adding he never found out who was actually occupying the island.

The bullet went through the right wing, disabling half the landing gear, he said.

Dunphy knew that would mean he would have to land the plane on its belly, something he knew he could do.

“I wasn’t concerned too much about it.”

He gave his crew the option of bailing, but they all stayed with him in the end. He ended up landing the plane without injuring anyone on the crew.

Dunphy left Europe in June 1944, serving the final days of the war on a training base in British Columbia with his new bride.

Dunphy still has some of his medals and an old uniform, items he said aren’t anything out of the ordinary.

“Everybody gets medals in the war.”

There was a medal that stood out from the rest, though. A distinguished flying cross he was awarded when the war was over to celebrate his hard work.

While Dunphy didn’t say much about the award, the federal government estimates the Royal Canadian Air Force only gave out about 4,000 during the Second World War, while only 247 were given to Canadians serving in the Royal Air Force during the war. They were given out to honour pilots for acts of valour, courage or devotion while flying in active operations against the enemy.

After the war, Dunphy went to work at a lumber mill, but bought a small plane and built the Dunphy Airstrip in Blackville so he could continue to fly.

Since then, he has flown water bombers and has done some aerial photography in northern Manitoba, Saskatchewan and the Northwest Territories. He stopped flying when he was 61, although he still gets to be a passenger.

His most recent venture includes a CD he made over the winter that details some of the basic principles of flying.

He made the CD on his computer, and it includes audio, visuals and text, a project Dunphy said he did, “for something to do.”

He has no plans for the CD, although he said he’ll probably burn copies for friends who want one.