For the second year in a row, District 6 Miramichi Commander Staff Sergeant Greg Grant has won the Connaught Cup as the RCMP’s top shooter in Canada. 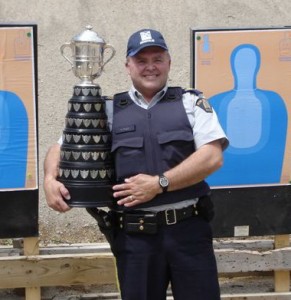 The Connaught Cup Championship was held last week in Ottawa.

Prior to S/Sgt. Grant’s victory last year, the trophy had not been awarded to an RCMP member from New Brunswick since 1934.

The Connaught Cup, Canada’s second oldest trophy next to the CFL’s Grey Cup, was donated to the Royal North West Mounted Police by Field Marshal H.R.H., the Duke of Connaught, Governor General of Canada in 1912. It is awarded to the top handgun marksmen in the RCMP.

Over the past 98 years of the competition there are only nine other members who have won the Cup back-to-back.