Blackville is a small village on the Southwest Miramichi River where local residents pride themselves on the rich salmon pools that draw anglers from across the globe.

That sport fishing industry provides seasonal employment for some of Blackville’s citizens, but many are worried about the village’s long-term economic survival.

The issue of shale gas exploration and the possibility of hydraulic fracturing, also known as hydro-fracking, has caused many citizens across New Brunswick to protest against any new developments. 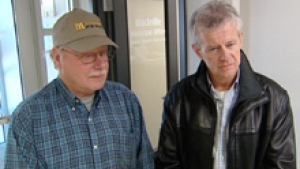 But in Blackville, the tone is different. Some in the village are not opposed to the possibility that shale gas could be beneath their feet.

Herb Barry has lived in Blackville most of his life and as he puts it, Blackville is perfect, if you don’t need to work.

“There’s nothing here. No, there’s no work for young people,” he said.

“It’s a great place for old people so you can fish and hunt and do nothing.”

Blackville has roughly 900 residents. The village used to have its own police force, more than a dozen businesses and a lumber mill that employed hundreds of people.

Now, there are just a few businesses still going, the police force is disbanded and the mill has been closed for years.

In past generations, young people could aspire to work in the local mill. But those days are gone.

“There’s never been a time in this country, in my 69 years, that you couldn’t go into the woods and cut a cord of pulp and sell it and buy a roll of bread,” said Emery Brophy.

“Presently, that is not available because you can’t sell it “

People here aren’t pinning their hopes on the forest industry anymore, instead they are wondering whether they are standing on top of their next economic strategy.

SWN Resources has leases across the area, spanning roughly one million hectares.

The company has spent time testing to see if there are shale gas deposits that would be economically viable to extract. It has also held open houses to discuss the possibilities of the shale gas industry coming to the area.

Tom Alexander, the general manager of SWN Resources Canada, said people in Blackville are excited about the possibilities of jobs in the gas industry.

The shale gas executive, however, stresses it is too soon to tell what the economic impact of the industry could be on small communities, such as Blackville.

“I’m pretty excited about the possibilities up there. Can I tell you the resource looks good or bad up there? I don’t, we just don’t know the answer yet,” he said.

SWN Resources was testing in central New Brunswick earlier this year. However, it suspended its seismic testing plans after some of the equipment being used in the testing was damaged.

Protesters also blockaded some the trucks carrying seismic testing equipment on a dirt road about 15 minutes away from Stanley.

What has many protesters concerned is the use of hydro-fracking.

Hydro-fracking is a type of natural gas extraction that shoots a pressurized mix of water and other substances into shale rock formations.

A fluid mixture of water and chemicals is also injected under high pressure deep underground. That process creates or widens fissures in the rock and that allows natural gas to escape.

Opponents to the industry worry about water contamination.

Even the possibility of an economic rival fuelled by the shale gas industry is giving some in the community a sense of hope. Blackville Mayor Glenn Hollowood said any new jobs would be appreciated in his village.

“We have no employment here, only the grocery store and a few small places. So it will be a help,” he said.

Other local politicians are willing to look past the protest signs and see the shale gas industry as a way to keep young people in the community.

Blackville Coun. Hal Muck, who is a former high school principal, said he hopes the industry could bring with it high-paying jobs for people in the area.

“Kids are going to have an opportunity if it comes to the area to look at different careers,” he said.

“You take, like petroleum engineering technicians, and those are some ideas that they never took a look at before.”