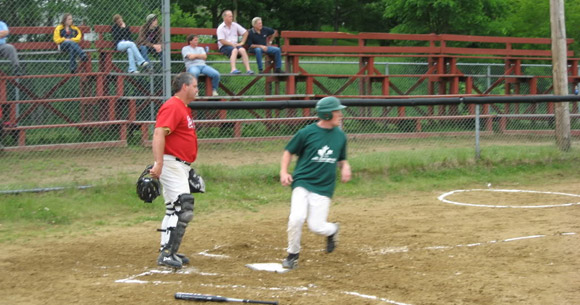 Jimmy Keenan of the Blackille 49’ers and Jeremy Regan

The last out has been called and the Blackville 49’ers have emerged as the 2011 Robert Blacquier Memorial Fast Pitch Softball Tournament Champions.

The Fast-Pitch action seen this past weekend in Nelson was even better than the weather experienced as one couldn’t ask for a better weekend for softball. Fans enjoyed a very competitive round robin on Friday and Saturday, setting up the match ups for Sunday.

After the round robin in the Bud Division the Nelson Well Pub had earned a 3-0 record and a bye to the semi-finals. Finishing in second were the Fredericton Twins at 2-1, in third the Coady St. O&C’s going 1-2.

In the Blue Division, the Miramichi Brewers earned their bye to the semis by also posting a 3-0 record. In second were the Richibucto Jays at 2-1, the Blackville 49’ers grabbed the third and final crossover position at 1-2, and the Miramichi Midget Vics failed to make the playoff round going 0-3.

In Sunday’s cross-over games the Richibucto Jays earned a spot in the semis defeating the Coady St. O&C’s 9-5. In the other semi, Blackville downed the young Midget squad from Fredericton 5-0 to advance.

In semi-final action the Nelson Well Pub got out to an early lead but the Richibucto Jays came back and earned a hard-fought 4-1 victory to move onto the championship. In the other semi-final it was a rematch from round robin play but this time it would be a much different story as Blackville would move on, turning away the Miramichi Brewers 4-1.

The championship saw two familiar foes that faced each other in last year’s final and once again they put on another great show for fans at the King field. However it was Blackville this time who would take the crown as Richibucto was unable to claim their second consecutive title, with the 49’ers edging them in a tight 3-1 game that saw very good pitching.

Jimmy Keenan would get his third win on the day and the offence was provided by a two-run homerun from Ian Underhill and a solo shot from Kris McKay. Trevor Ryan, who was also making his thirdrd pitching appearance on the day, suffered the loss.

The Nelson Softball Association congratulated Blackville on their win and thanked all teams for providing some great fast pitch softball action and the volunteers who helped around the field or in the canteen area.