She might be small in stature, but Charity Walls has the heart of a lion.

Walls loves all sports, but give her a hockey stick and she is in her own heaven. This coming season, Warner, Alta. will be hockey heaven for Walls. 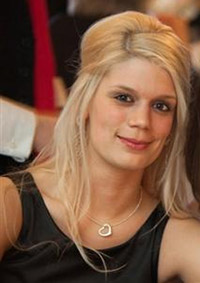 Walls is a 17-year old Grade 11 student at Miramichi Valley High School and lives in Blackville. She was scouted by former Miramichier Jamie Wood who heads the girls hockey program at Warner High School. Wood liked what he saw and has recruited Walls to play for his team this season.

After launching the women’s ice hockey team at Elmira College in upstate New York, where Wood spent a year scouting and putting together his team, Wood led the Elmira Soaring Eagles women’s hockey team to a pair of Tier III U.S. collegiate championships for which he was named NCAA Coach of the Year in 2002 and runner-up in 2003.

Wood then came back to Canada to coach at the Warner Hockey School, just outside of Lethbridge. He holds the position of head coach and director of hockey operations.

Warner is a unique place for skilled girls who wish to pursue their education while also continuing to develop their hockey skills. And at Warner High, these two go hand in hand. Wood said that the Warner program is special.

Warner is a public school, not a private one. It is located in a small community of about 400 people and about 300 to 400 attend the games.

“It is a great atmosphere and we are very well supported by the community,” Wood said. “The school has a program that actually has hockey on the curriculum. The girls take it as a subject. We work with girls between the ages of 13-18.”

Wood said his girls team plays in a 10-team AAA midget league. They play close to 50 games a year. In his first year, his team had a record of 28 wins, 15 losses and seven ties.

Wood said the hockey program is a very demanding one but a rewarding one.

“They all want to earn scholarships to go on to university. Some of the top schools will give up to $100,000 over four years. That’s worth working for. It is a great incentive and a great investment.”

Pam Patterson was given a scholarship to Ohio State for this coming year.

Walls is a left-shooting forward who stands five-feet-four. She began playing hockey when she was 12 years old.

Walls played peewee hockey in Renous and then moved on to bantam house league. In Grade10 she transferred to Miramichi Valley high School and suited up with the MVHS Pulamoo.

Walls lost the Northern Conference girls scoring title by only one point as she tallied 69 points in 18 games. She was selected MVHS rookie of the year for the Pulamoo girls team.

Her efforts earned her an invitation to try out for the under-18 provincial tam and she made it.

This past year Walls finished fourth in scoring in the Northeastern Conference with about 70 points.

Walls credits many people for supporting her along the way. Among those are her family and the many coaches, managers and teachers she had over the years.

Naturally, she also acknowledged Blackville’s Kathy McCormack who won a silver medal with the Canadian women’s hockey team at the Winter Olympics in Japan.

Walls will not be completely alone in Warner. Joining Walls will be Sarah O’Toole of Oromocto.

Walls leaves for Warner on Aug. 24 to attend training camp.