It’s May of 1959, and Pat Fournier is attending a night-time screening of “The War of the Worlds” at Saint Raphael’s church hall. In the seventeenth installment of his memoir, Memories of a Boy Growing Up in Blackville, twelve year old Pat faces a frightening walk home after watching the scariest movie he’d ever seen.

It’s strange how some memories just stick in your mind, and remain nestled in the background as long as you live! This is one of them. 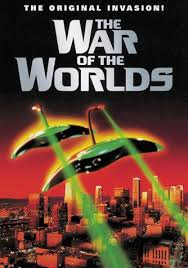 I went to an early evening movie called “The War of the Worlds” in St. Raphael’s church hall. In the movie, Earth was being invaded by aliens in big flat-winged spaceships that looked like manta ray fish, with elongated necks that stuck up from their bodies. The aliens were intent on taking over the Earth for their own use, and were shooting laser beams from their ‘eyes’, immediately disintegrating anything or anyone they shot. While the armed forces used bullets, grenades, tanks, rockets, flamethrowers and whatever ammunition they could get their hands on to battle the aliens, it was to no avail. Nothing could put a dent in those spaceships!

One of the characters in the movie was a minister, who thought he could hold out the Holy Bible and invoke peace for all humanity, in the name of the Lord! But as he fearlessly walked toward one of the spaceships, holding his bible up high and encouraging the aliens to listen to his plea, he was shot with a blast of laser beam and disintegrated! His pretty red-haired daughter, who was crouched behind a barricade with some soldiers, screamed and cried, and had to be held back from running to him. 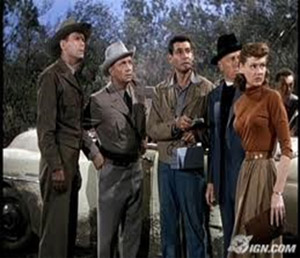 Finally, the alien spaceships just started to fall and crash to earth, with all of the aliens inside of them dying! The hero of the movie – – the boyfriend of the minister’s daughter, of course – – figured out that the aliens were dying simply because of the bacteria in the Earth’s atmosphere, which the aliens weren’t used to. So they were dying like fish out of water, because they couldn’t live in our Earth’s environment.

After the movie, as I left the hall and walked back up the hill to home, I kept looking up to the sheer black summer night sky, which was sprinkled with bright planets and stars. And my imagination got the better of me! I could swear that I saw some lights in the sky moving! They weren’t stars! They were alien spaceships! There was a whole fleet of them! I was sure of it! There were alien spaceships up there, hidden amongst the planets and stars!

And it was all I could do to force myself to continue to walk, instead of running scared for my life, back home to the house!

That movie is still seared in my memory as the scariest movie I’d ever seen!