My Time in the Royal Canadian Air Force

My name is Ella Rosalie (Mountain) Curtis and I served during World War II with the Royal Canadian Air Force (Women’s Division). 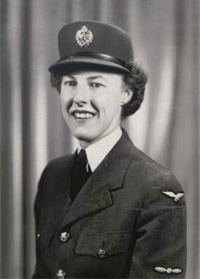 I was born on February 22, 1923 in Blackville, the daughter of Freeman Mountain and Ethel Crocker.  I married a World War II veteran Byron Curtis who served with the Corps of Royal Canadian Electrical and Mechanical Engineers.  We had three children: Patricia Curtis, Peter Curtis and Nancy Curtis.

I enlisted with the Royal Canadian Air Force (Women’s Division) in the fall of 1943 in Moncton, NB.  I was posted to Rockcliff Air Base north of Ottawa to do my basic training.  I stayed there until Christmas 1943.

In January, 1944 I was posted to the Mountain View Bombing and Gunnery School in Belleville, Ontario.  Here I taught aircraft recognition to the R.A.F. and Royal Australian Air Force men who were being trained to become bombers and gunners.

In April 1944, I was posted to the No. 1 Training Command in Toronto and then in January 1945 to the Clinton Radar School in Clinton, Ontario.  Radar was just being discovered.  It was a hush-hush station.  I was in Clinton on V.E. Day in May 1945.  They told us the war was over.  I remember we were all happy about it but I don’t think they even gave us the day off.  We just kept working as if nothing had happened.

I remained in Clinton until April 1946.  While in Clinton, I also served as an occupational therapist working in the Hobby House to give airmen coming home from the war something to do while they were waiting to be discharged.

I was discharged on April 13, 1946 in Lachine, Quebec with the rank of Leading Air Woman.  I got married to Byron Curtis the next week in Blackville, NB.

After the war and after my children were all grown, I taught school for a number of years at the Blackville School.  I was also the oldest serving bartender, 70, serving as a bartender at the Royal Canadian Legion, Branch No. 49 in Blackville.

Watch video of Ella Curtis below filmed during the Heritage Day festivities held in Blackville in February 2012. In the video, Ella recalls her time in the Royal Canadian Air Force (Women’s Division).